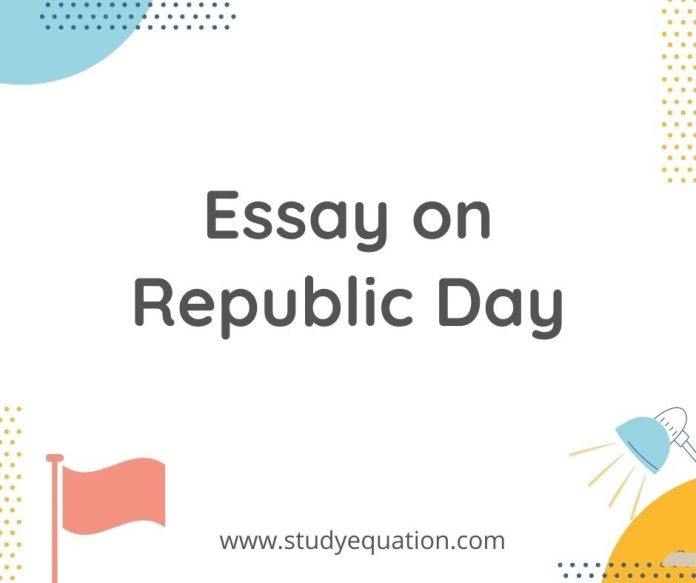 StudyEquation presents to you, Essay on Republic Day. It is a 500+ words essay briefing you about Republic Day, the history behind it, its celebration in India. It also comes with an introduction to writing an essay and special tips for writing a great essay!

Essay on Republic Day for students especially recommended by CBSE. We also provide Notes and Lesson Plan. Our Study Rankers specially made them for better understanding. Students may read the PDF to practice concepts with NCERT Solutions and Extra Questions and Answers. We prepared these by keeping in mind the latest CBSE curriculum. Shine among your friends after scoring high in Quiz, MCQ, and Worksheet.

We, the citizens of India, annually celebrate Republic Day as it is the anniversary day of India to become an independent republic. 26 January is a day of national pride. Though India’s declaration of Independence was signed on 15th August 1947, the constitution which was written for independent India came into the effect on January 26, 1950. And hence, 26th January is celebrated as Republic day of India.

Republic Day reminds us of our Indian national struggle towards freedom. This struggle for freedom was based on principles like non-violence(ahimsa), cooperation, non-discrimination, etc. This is the reason why Indians celebrate Republic Day with exceptional zeal and enthusiasm. Republic Day reminisces us of the values and ideals portrayed in the constitution of India, which holds immense power.

All over India, people in different parts of different states hoist flags and sing the Indian National Anthem written by Rabindranath Tagore. The President of India presides the parade which is held in the national capital – New Delhi, starting from Raisina Hill close to Rashtrapati Bhavan, along the Rajpath, past India Gate, and on to the historic Red Fort within the old quarter of the city. The display of grand military pride shows and reminds us of the reason behind the security of our territorial sovereignty.

During this parade, the armed forces display their military performance with high enthusiasm. Different infantry, cavalry, and mechanized regiments of the Indian army, the Indian navy, and the Indian Air Force march in formation, decked in all their finery and official decoration. The President of India, who is also the Commander-in-chief of the Indian Armed Forces, takes the salute. The chief guest of the parade is a head of state of another nation. On this day, bravery awards are given to the children and citizens of the country to inspire and motivate the other citizens and instill in them a feeling of nationalism and patriotism. It traditionally ends with a colorful flypast by Airforce jets in a beautiful tiranga formation.

Similar parades are held in the capitals of all the states of Hindustan, where the governor of the individual states takes the salute. All the Indians the states and union territories of India display their cultural presentation which shows that India is a secular and a federal country. There are cultural programs in schools, republic day speeches, competitions in various sports programs, essays related to the Indian national freedom movement, and many more. It’s astonishing how every Indian citizen of different age and interests and religion celebrate this day.

On the prestigious Republic day, all the Indians remember the martyrs of the brave youth of the motherland and vow to make India a better and peaceful nation. The Republic Day recalls us of our workable constitution which is the result of many hardworking hands.

The Preamble lays down the most essential national goals which every citizen and the government must try to achieve, such as socialism, secularism, and national integration. The first word of the Preamble – “We, the people”– signifies that the ultimate power is in the hands of the people of India. As India is a secular state with diverse religions and cultures, we celebrate numerous festivals in India with lots of fun and joy. The beauty and amazement of Republic Day are that all categories of nation celebrate it without making any discrimination. The Republic Day recollects the spirit, pride, and patriotism among the citizens. All the citizens of India take the pledge to be better citizens and make their country a better and peaceful place to live.

The above written includes an Essay on Republic Day for students with Top Tips. Browse our site for various detailed and easy NCERT Solutions and CBSE Notes.

Also read Essay on Save Water by our study rankers.