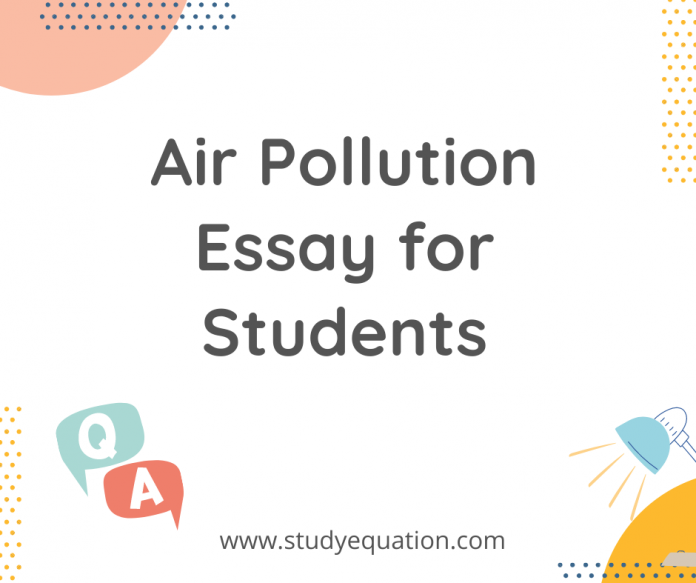 Air is one of the most important elements of our life. Air constitutes of a mixture of a variety of gases, the most abundant being nitrogen and oxygen. It is estimated that just after 4-5 minutes without air a person’s brain cells will begin to die. Also if a room is filled with carbon dioxide, a person’s brain cells start dying only after 3 minutes. This is why air pollution is a serious topic.

Pollution is the introduction of contaminants into the natural environment that can cause prolonged changes. Air pollution is one of the most serious topics debated all around the world. Just like other pollution, air pollution is the addition of harmful substances to the air in our surroundings. Air pollution does not only affect the health of human beings, but it also affects other animals and also causes damages to the properties.

Air pollution is caused by solid and liquid particles and certain gases that are introduced in the air. These substances are known as pollutants. The pollutants come from different sources such as smoke from various factories like vehicles, factories, eruptions, etc., CFCs, deforestation and other reasons.

Pollutants like smoke from factories are a huge problem that is sharply increasing. Factories contaminate the air by adding chemical vapours and smoke out through vents and by burning waste in open dumps. The smoke from cars and buses are also increasing at an alarming rate. Because of new models and cheaper versions of cars and selling of used cars, it is easier for citizens to buy private cars which add to the pollution level too.

This smoke that they produce has carbon dioxide and other hazardous gases that act as greenhouse gases. Together these gases have posed a problem to the world and are causing the temperature of the earth to rise overall. The greenhouse gases lead to warmer temperatures by trapping the earth’s heat in the atmosphere and this leads to rising sea levels, more extreme weather and heat-related deaths.

Acid rain is also a major concern. This acid rain is also caused due to the rainwater mixing with acids. Sulphur dioxide, carbon dioxide and various oxides of nitrogen are present in smoke from the sources mentioned above. These gases rise up and mix with the water vapour that comes down to the earth as acid rain. This acid rain is very dangerous for trees and fishes in water bodies. Acid rain has a disturbing impact on forests, freshwater and soil. It kills insect and aquatic life-forms as well as causes damage to buildings and has impacts on human health too. Due to the corrosive nature of the acids, it damages both non-living things such as buildings, monuments, bridges, etc. as well as living organisms.

Taj Mahal, one of the Seven Wonders of the world is also affected by the acid rain.

CFCs were also used as cooling agents in refrigerators and air conditioners. These CFCs had severe side effects that we did not know before. They react with ozone in the earth’s protective ozone layer which helps us guard against the harmful Ultra Violet rays. This leaves a hole in the ozone layer and this lets the UV rays enter the earth.

These UV rays strike the skin, and cause severe health problems like increased incidence of skin cancer and cataracts, immune system damage, damage to terrestrial and aquatic plant life and also increased formation of ground-level ozone (smog). But now thankfully these CFCs have been banned but the hole that has been formed is huge and it can take many years to be fully recovered.

We can reduce air pollution by taking the right steps. Some of the steps are:

Air Pollution Essay: Conclusion. The government should also take steps and should fine factories if they produce too much air pollution. The government should also make a bill for personal vehicle owners and make them change their vehicles if they are too old as the older vehicles produce more air pollution. Lastly, air pollution is severe damage to the climate and living beings. Some data show that asthmatic conditions have increased drastically in young children with an increase in air pollution. We have to take steps individually as a person to combat this change.