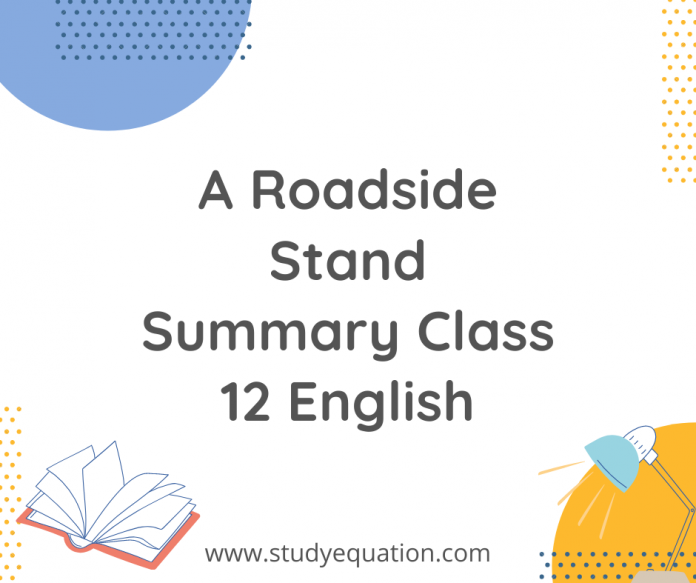 CBSE Summary with NCERT Solutions For Class 12 English Flamingo Poem A Roadside Stand for revision. And also for better performance in tests and exams. The poet, Robert Frost, in this poem, deals with the lives of poor deprived people of the villages and portrays his deepest sympathies and his feelings of humanity. Below you can find a brief explanation of the lesson and NCERT Solutions For Class 12 English Poem A Roadside Stand.

We also provide Notes and Lesson Plan. Our Study Rankers specially made them for better understanding. Students may read the PDF of NCERT Class 12 English Flamingo Poem A Roadside Stand to practice concepts with NCERT Solutions and Extra Questions and Answers. We prepared these by keeping in mind the latest CBSE curriculum. Shine among your friends after scoring high in Quiz, MCQ, and Worksheet.

The poem, A Roadside Stand, is Robert Frost’s criticism of an unequal society where there is a large division between, the rich and the poor, the haves and the have nots owing to the iniquitous distribution of wealth. The poem depicts with clarity the plight of the poor and the complex dynamics of their existence. It also so focuses on the unfortunate fact that the unequal progress and development between cities and villages have led to the feeling of distress and unhappiness in the rural people.

Stanza-wise Explanation of the Poem

(All the italicized lines given below have been taken from Robert Frost’s poem, ‘A Roadside Stand’. Also, find NCERT Solutions For Class 12 English Flamingo Poem A Roadside Stand below.)

The poem starts with the description of the roadside stand. A small time farmer who puts a little shed in part of his house several thousands of cars sped past it. He desires to sell wild berries, squash and other products. The farmer does not like charity. He tries to sell his products for money. He believes that money can give him a better lifestyle as he saw in movies.

However, his hopes are never fulfilled. People in cars go past without even giving a cursory look at his stall and if few of them happened to look at it, they see how the letters N and S had been turned wrong. They believe that such badly painted signs spoil the beauty of the countryside.

Have You Revised The Last Lesson?

Have You Practiced Notice Writing?

The farmer tells the rich to keep their money if they are meant to be so cruel and mean. He is not hurt that they do not notice the stand but he is hurt at the way he is treated and ignored. He wishes for some city life and money which he has seen in movies and other media but the political parties are denying him all these plush life.

It is known that some good doers plan to remove their poverty. They aimed to buy their property on the roadside to build theatres and stores. Good-doers plan to shift the villagers into the village huddled together. They wished to teach them the ways that could change their good and healthy habits. They even aimed to teach them to sleep during day time. The greedy good doers and beneficient beasts of prey desire to force the benefits on the poor village people and befool them.

Have You Revised An Elementary School Classroom in a Slum?

Frost talks about his own personal feelings. He is intolerable towards the farmer’s battered hopes. The windows of the farmer’s house just ache to hear the sound of a car stopping to make some purchase. However, they are always disappointed as the cars stop either to enquire about the police or about the gas stations.

Have You Practiced Advertisement Writing?

The poet feels quite discrete at the pitiable sufferings of the poor village folk. He even had a childish desire for all the poor to be done away with at one stroke to end their pain. But he knew that it is childish and vain. So he desired that someone relieves him of his pain by killing him.

Q. 1. The city folk who drove through the countryside hardly paid any heed to the roadside stand or to the people who ran it. If at all they did, it was to complain. Which lines bring this out? What was their complaint about?

A) The lines that bring out the arrogance of the passers-by are:
“Or if ever aside a moment, the out of sorts
At having the landscape marred….
They complained that the disfigured paint of the stall spoilt the beauty of the landscape, the signposts pointed the wrong way and the stalls were not maintained.”

Q. 2. What was the plea of the folk who had put up the roadside stand?

A) The people of the roadside stand pled that some pollished city traffic should stop by and buy their goodies so that they could make some money to improve their livelihood.

Q. 3. The government and other social service agencies appear to help the poor rural people, but actually do them no good. Pick out the words and phrases the poet uses to show their double standards.

A) The poet uses the word ‘greedy good-doers’, ‘beneficent beasts of prey’ and ‘enforcing benefits that are calculated’ to show their double standards.

Q. 4. What is the ‘childish longing’ that the poet refers to? Why is it in vain?

A) The poet refers to the desireful longing of the stall owners for some city folk to stop by and give them an opportunity to make some money. But their waiting is vain because the cars just pass by without thinking of the hope of these poor deprived people. If at all they stop, it is to ask the way or to take turn or complain about the signs.

Q. 5. Which lines tell us about the insufferable pain that the poet feels at the thought of the plight of the rural people?

A) The lines from the poem that express the poet’s insufferable pain are:
“I wonder how I should like you to come to me
And offer to put me gently out of my pain.”

Q. 1. Why didn’t the ‘polished traffic’ stop at the roadside stand?

A) The ‘polished traffic’ sped past the roadside stand and did not stop there as their mind is focused only on their destination. Moreover, they were critical of the poor decor of the stand and complaint that it reduced the beauty of countryside.

Q. 2. What news in the poem ‘A Roadside Stand’ is making its round in the village?

A) The news is about the resettlement of the rural people who will be resettled in the villages, next to the theaters and the stores. They would be close to the cities and will not have to worry about themselves any more. But it was all an activity of “greedy good-doers”.

Q. 3. Why do people at the roadside stand ask for city money?

A) They ask for city money so that they can lead a life of happiness as the rural people running the roadside stand are poor and deprived, unlike the people of the city. This much-needed city money can give them a good livelihood.

Robert Frost, in his poem, A Roadside Stand, has very clearly visualised the plight of the rural folk. The city folk who drived through the countryside hardly pay any heed to roadside stand or the people who run it. The poet has urged the necessity of the balanced development of both.

The above written includes the explanation and question answers of NCERT Solutions For Class 12 English Poem A Roadside Stand. Browse our site for various detailed and easy NCERT Solutions and CBSE Notes and Comprehensive Summary.