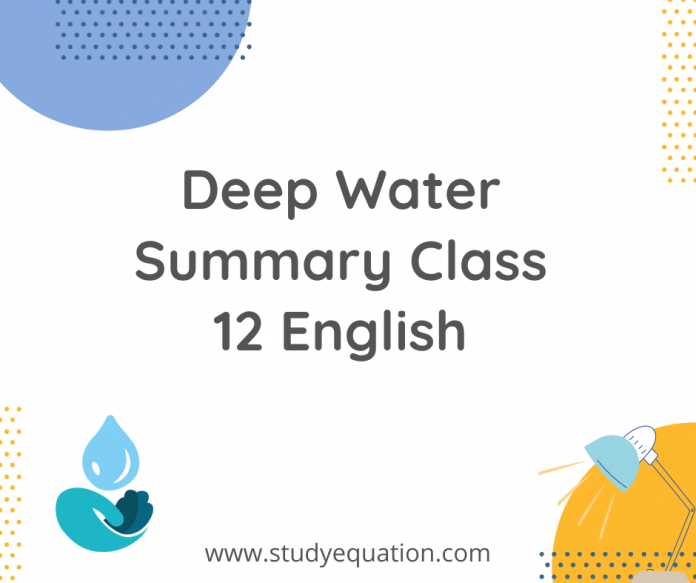 We also provide Notes and Lesson Plan. Our Study Rankers specially made them for better understanding. Students may read the PDF of NCERT Class 12 English Flamingo Deep Water to practice concepts with NCERT Solutions and Extra Questions and Answers. We prepared these by keeping in mind the latest CBSE curriculum. Shine among your friends after scoring high in Quiz, MCQ, and Worksheet.

Douglas talks about his fear of water and how he finally overcomes it with strong will power, courage, hard work, and firm determination. By this incident of Douglas, Patricia shows most of our fears are baseless. Fear creates dangers where there is none.

The chapter ‘Deep Water’ tells us how the narrator overcame his fear of water and learned swimming with sheer determination and will power.

He had developed a terror of water since childhood. When he was three or four years old, the writer had gone to California with his father. One day on the beach, the waves knocked the child down and swept over him. The child was terrified but the father who knew, there was no harm, laughed. The experience bred a permanent fear of water in the child’s sub-conscious mind.

Have You Revised An Elementary School Classroom In A Slum?

Still another incident, more serious, increased his terror. The writer was trying to learn swimming in the Y.M.C.A. swimming pool in Yakima. One day while he was waiting for other boys, a big boy suddenly played a dangerous prank and pushed him into the water. The writer was terribly frightened. He went down nine feet into the water. When he reached the bottom, he jumped upward with all his strength. He came up but very slowly and tried to catch hold of something like a rope but grasped only at water. He tried to shout but no sound came out. Again, he went down. His lungs ached, head throbbed and he grew dizzy. He felt paralyzed with fear. All his limbs were paralyzed. Only the movement of his heart told him that he was alive. Again he tried to jump up. But this time his limbs would not move at all. He looked for ropes, ladders and water wings but all in vain. Then he went down again, the third time. This time all efforts and fear ceased. He was moving towards peaceful death. The narrator was in peace.

Learn About Benefits of Swimming!

When he came to consciousness, he found himself lying on the side of the pool with the other boys nearby. The terror that he had experienced in the pool never left him. It haunted him for years and years to come. This fear spoiled many of his expeditions of canoeing, swimming and fishing. It spoilt his pleasures in Maine Lakes, New Hampshire, Deschutes, Columbia and Bumping Lake etc. But the writer was determined to conquer his terror.

He took help of a swimming instructor to learn swimming. The instructor taught him various actions necessary in swimming part by part. He put his face under water and exhaled and inhaled raising it above water and practiced it for several weeks. He had to kick with his legs a few weeks on the side of the pool.

At last he combined all these actions and made the writer swim. He learned swimming but the terror continued. Whenever he was in water the terror returned. Hence forward the writer tried to terrorize terror itself. He tried to face the new challenge. When terror came, he confronted it by asking it sarcastically as to what it can really do to him? He plunged into the water as if to defy the fear. Once he took courage the terror vanquished. He faced the challenge deliberately in various places like the Warm Lake. He conquered it at last.

THINK AS YOU READ

Q. 1. What is the “misadventure ” that William Douglas speaks about?

A) William O. Douglas had just learnt swimming. One day, an eighteen year old big bully picked him up and tossed him into the nine feet deep end of the Y.M.C.A. pool. He hit the water surface in a sitting position and swallowed water and went to the bottom of the pool. He almost died in this misadventure.

Q. 2. What were the series of emotions and fears that Douglas experienced when he was thrown into the pool? What plans did he make to come to the surface?

A) Douglas was afraid when he was thrown into the pool. However, he did not panic. While sinking down he made a plan to make a big jump when his feet will touch the bottom. He would come to the surface like a cork, lie flat on it, and paddle to the edge of the pool.

Q. 3. How did this experience affect him?

A) On regaining consciousness after being rescued, Douglas found himself lyung on his stomach and vomiting. The misadventure left him weal and trembling. He shook and cried when he lay on his bed. He could not eat that night and was haunted by fear for days. The slightest exersion upset him making him wobble in the knees and sick to his stomach. He developed an aversion for water and never went back to pool. It took him years and persistent efforts and training to overcome the fear.

THINK AS YOU READ

Q. 1. Why was Douglas determined to get over his fear of water?

A) The misadventure of having a near-drowning experience left an indelible mark on Douglas’ mind. The phobia of water hampered all of his joys of enjoying different water sports like fishing, canoeing, boating, swimming. Douglas did not want to live with this handicap,so he was determined to overcome it at any cost.

Q. 2. How did the instructor “build a swimmer” out of Douglas?

A) Realizing Douglas’ mortal fear for water,the instructor devised a novel way of helping him. He attached the rope to the belt worn by Douglas which went through a pulley that ran on an over-head cable. Holding the end of the rope in his hand, he mad Douglas go back and forth in the pool without any acute sense of fear. Next he taught him breathing technique and different swimming styles.

Q. 3. How did Douglas make sure that he conquered the old terror?

A) Although Douglas was now trained, he still feared water when he was alone in the pool. His old terror would return, but he used to suppress it and do another length of the pool. But he wanted more confidence, so, he went to Lake Went-worth in New Hampshire, dived off a dock at Triggs Island and swam two miles across the lake, went to Meade Glacier, dived into Warm Lake and swam across to the other shore and back. And by this, he made sure that he had conquered over his old terror of water.

Q. 1. How does Douglas make clear to the reader the sense of panic that gripped him as he almost drowned? Describe the details that have made the description vivid.

A) The author has given very detailed account of Douglas’ feelings and trials from getting drowned by using many literary devices. For example, ‘Those nine feet were more like ninety’ (exaggeration), ‘My lungs were ready to burst.’(exaggeration), ‘I came up slowly, I opened my eyes and saw nothing but water….. I grew panicky’ (visuals), ‘I was suffocating. I tried to yell, but no sound came out!’.

Q. 2. How did Douglas overcome his fear of water?

A) When Douglas grew up, he decided to overcome his fear and he took the help of an instructor to learn swimming. Realizing Douglas’ mortal fear for water,the instructor devised a novel way of helping him. He attached the rope to the belt worn by Douglas which went through a pulley that ran on an over-head cable. Holding the end of the rope in his hand, he mad Douglas go back and forth in the pool without any acute sense of fear. Next, the instructor taught him to exhale under water and inhale through raised nose. He made him kick his legs to make them relax. Then he asked him to swim. He continued swimming from April to July. Still, he was not satisfied, so, he swam two miles across Lake Went-worth and the whole length to the shore and back of Warm Lake. Finally, he overcame his fear of water.

Q. 3. Why does Douglas as an adult recount a childhood experience of terror and his conquering of it? What larger meaning does he draw from this experience?

A) An individual’s personality is based on his childhood exposure and experiences, complexes and fear ingrained in the mind as a child continue to stay with him even when he grows up. Therefore, by working relentlessly on a childhood experience of terror and conquering it, Douglas is giving us a glimpse of the inner strength of his mind. The childhood misadventure kept alive the icy horror that grabbed his heart for years to come.

A) ‘The big bruiser of a boy’ who tossed little Douglas into the pool had a hairy chest and rippling muscles. He was very proud of his impressive physique. This inconsiderate and irresponsible boy foolishly threw Douglas into the pool out of shear fun and mock at his underdeveloped muscles.

Q. 2. Why did mother warn Douglas against river Yakima?

A) Mother warned Douglas against river Yakima as it was treacherous. Very deceptive to look at, this apparently harmless river had climbed several lives. Mother did not want her 11 year old son to go anywhere near it. So, she warned him against the river.