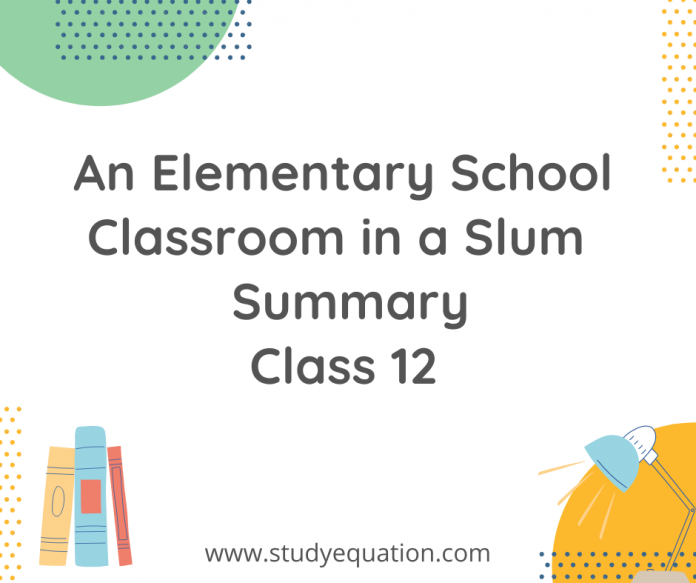 We also provide Notes and Lesson Plan. Our Study Rankers specially made them for better understanding. Students may read the PDF of NCERT Class 12 English Flamingo Poem An Elementary School Classroom in a Slum to practice concepts with NCERT Solutions and Extra Questions and Answers. We prepared these by keeping in mind the latest CBSE curriculum. Shine among your friends after scoring high in Quiz, MCQ, and Worksheet.

Let’s Summarise An Elementary School Classroom in a Slum

(Also find NCERT Solutions For Class 12 English Flamingo Poem An Elementary School Classroom in a Slum given below).

Quick Overview: An Elementary School Classroom in a Slum

The poem describes a primary school in a slum. Children studying in a slum classroom depict social injustice and perpetual poverty, prevailing among the slum dwellers. The poet expresses his belief that people who are ignited by the spirit of knowledge and learning are the ones who create history. It is a moral liability of everyone to break barriers between the haves and have nots and give a meaningful education to all. For history remembers only those people who are educated and have enlighted themselves for a better world.

Stanza-Wise Explanation of the Poem

Spender describe the miserable conditions of the children. The faces of the children are unlike the usual children of schools. Instead of being energetic, they are like rootless weeds, withered and worn out. They are unclean and untidy as they are malnourished, sick and hungry. Just as weeds are not wanted in the garden, so are these children of the slum unwanted in the society. They have pale faces. There hair is uncombed.

Learn more about : How to calculate SGPA

Another child of the class who is a victim of a genetic disorder has gnarled disease of twisted bones and stunted growth. He has inherited this disease from his father and recites the lesson from his desk in a mellow and weak voice. In one corner of this early late and ill-equipped class is a sweet unnoted young child lost in the world of his dreams. The dull and monotonous classroom does not interest him and hence his mind deviates towards the squirrel in his free room. He too, dreams of fun and frolic in an open space.

The poet describes the dirty classroom. On the walls are displayed the names of people who have given donations. The bust of Shakespeare is displayed in the clear background of the sky. Walls have pictures of the beautiful Tyrolese Valley as well as a map of the world. The children’s eyes can only view a narrow road enclosed with a dull sky. It is quite a dreary and depressing place for children.

Have you revised Going Places?

The pensive poet suddenly turns aggressive and feels that Shakespeare is wicked. This is because he misleads the children. He shows them a beautiful world of ships Sun and love which is not only an real for them but has a corrupting influence on these children and instigates them to steal try to escape from their cramped holes. Their existence is indeed very sad. These children are so thin that it appears that they are wearing only skins. The spectacles they are wearing has glass which has been broken and mended. Their entire appearance reeks of their deprivation. The poet shows his outrage by suggesting that the maps on their walls should show huge slums, instead of beautiful scenic graphics.

The poet reveals the appealing truth that there can be no change for the better unless a governor, school inspector or an educationalist or a visitor comes to the school. The map in their classroom is the only medium for the children to view the world outside their slums. The windows of the classroom shut them and confide them to their world of poverty and helplessness.

The poet appeals to those people who are in power to liberate these slum children from the horrendous life that they are leading. He also exerts the people themselves to break open these windows which appeared to have sealed the fate of these children. He would like to see these children bask in the education facilities in this world and run carefree on the golden sands and enjoy a new lease of freedom.

The poet earnestly believes that each and every child should be able to enjoy the fundamental rights of freedom. They should have access to all kinds of books, new as well as old. They should also be able to learn from nature around them.

Poem Analysis: An Elementary School Classroom in a Slum

(Also find NCERT Solutions For Class 12 English Flamingo Poem An Elementary School Classroom in a Slum given below.)

Tired of studying? Here are some funny metaphors and similes to lighten you up!

Q. 1. Tick the item which best answers the following.

A) 1. has an inherited disability.

A) 3. distracted from the lesson.

Have you revised The Last Lesson?

Q. 2. What do you think is the colour of ‘sour cream’? Why do you think the poet has used this expression to describe the classroom walls?

A) The classroom walls are painted in a off-white dull colour. These sour cream walls have been neglected and turned a dirty yellow colour. This is a symbol to a dismal place for the slum children, where all dreams turn sour.

Q. 3. The walls of the classroom are decorated with the pictures of ‘Shakespeare’, ‘buildings with domes’, ‘World maps’ and beautiful valleys. How do these contrast with the world of these children?

A) The walls of the classroom depict pictures of Shakespeare, sky-high buildings, maps and valleys of flowers. But, the world outside their classroom is full of poverty, hunger, and disease and deprived of hope and bright future.

Q. 4. What does the poet want for children of the slums? How can their lives be made to change?

A) Stephen Spender wants equal opportunities for the slum children to learn and earn. He wants them to be able to study to make a quality life for themselves. He believes that their lives can be changed when they are given good education, and a respectable life.

Q. 1. Why does Stephen Spender say that the pictures and maps in the elementary school classroom are not meaningful?

A) The pictures on the classroom walls portray a clean and civilised world. But, it is contrary to their real world outside their classroom which is full of poverty, hunger, and disease and deprived of hope and bright future. The portrait of Shakespeare is useless to the slum children because they will never be able to read his works. Hence, these are not meaningful.

Q. 2. Why do you think Shakespeare is ‘wicked’ and the map ‘a bad example’ to these children?

A) The portrait of Shakespeare is wicked because, due to lack of quality education and opportunities, the slum children will never relate to Shakespeare in English literature.
The map of the world with its colourful descriptions of the earth is a bad example to these slum children because their world is full of poverty, hunger, and disease. It is deprived of hope and bright future.

Conclusion: An Elementary School Classroom in a Slum

An elementary school classroom in a slum summary enlightens us about the poor condition of the students. The schools are maintained poorly and it’s walls are yellow. The future of these kids is in dark. The poet also highlights the plight of underprivileged children that are the so-called beneficiaries of government-funded education

The above written includes the explanation and question answers of NCERT Solutions For Class 12 English Poem An Elementary School Classroom in a Slum. Browse our site for various detailed and easy NCERT Solutions and CBSE Notes and Comprehensive Summary.