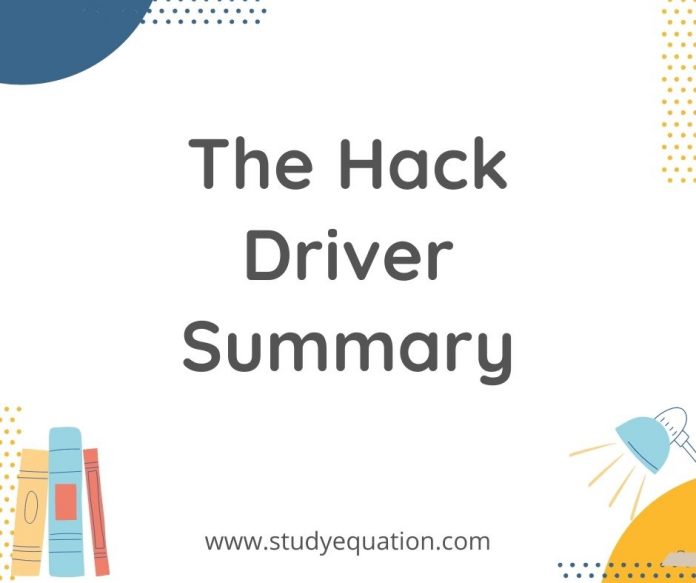 The Hack Driver Summary. The chapter ‘The Hack Driver‘ is written by the author Sinclair Lewis. Here the author tells us a story about a young lawyer who does a very silly mistake that almost brought his growing career to an end.

Let us find out through this summary about the story.

This story is about a lawyer who graduated with honours and became a junior assistant clerk in a magnificent law firm. He was made to serve summons like a cheap private detective. He had to go to dirty and shadowy corners of the city to seek out to his victims. Sometimes he also got beaten up by the more self confident ones. He hated his work and the site of the city life that was revealed to him. He sometimes considered going to his home town where he could have been a real lawyer.

One day he was sent 40 miles away to the country in the town of New Mullion. He was very happy but as he reached there, he was very disappointed he was sent to serve summons to a man called Oliver Lutkins. There he met a delivery man at the station. He had a red face and a cheerful personality. He was wearing dirty clothes but looked friendly. The lawyer told him that he wanted to find a man named Oliver Lutkins. The person said that he saw Lutkins at the same spot an hour ago. He was told that Lutkins was a very hard person to be caught. He would always play poker game in the back of Fritt’s shop. The lawyer said that he had a train to catch in the afternoon which was going to take him back to the city.

The person replied that he had a hack and together they could find Lutkins. The lawyer negotiated with the person to give him two dollars per hour and then the hack driver took out his hack and they started their journey.

The hack driver asked the lawyer if he had also come to collect some money from Lutkins and also told him that Lutkins was a bad person who never paid the money back to anyone. The lawyer was very happy that he found a friendly hack driver. He thought to himself that without the hack driver’s help he would have never found Lutkins. He told the hack driver his real purpose of coming to the city.

The lawyer and the hack driver went around the city and they searched everywhere for Lutkins but all their hard work went in vain. After 1 o’clock the lawyer suggested driver to go to a restaurant to have a meal with him. He also suggested that he would buy him lunch. The driver said that he was going home to his wife and that he did not like the restaurants. So he told the lawyer that he would go to the wife and then she would pack lunch for them. He told the lawyer that the wife would charge half a dollar but it would be better than a meal at a restaurant.

The lawyer loved his company but he also knew that he was only companying him because the lawyer paid him for his time and in the end, they paid he paid him for 6 hours and that also included his lunch hour. Bill’s company and his young country spirit were amazing. The lawyer liked how Bill noticed everything and no matter how much he might laugh at people, he also understood and forgave their foolishness. They gossiped a lot about their neighbours.

Then they got out of the place and the lawyer went back to the city. He was not much sad about his failure to find Oliver but he was busy thinking about Billy Magnuson. Next morning their case was coming up in the court and they had to have Lutkins. The lawyer was very shameful and he thought himself to be a useless fool.

Oliver Lutkins’ was the Hack Driver

Then the Chief send him again to New Mullion and with a colleague who knew Lutkins. On reaching the station the lawyer told about Bill who was very helpful to him in searching for Lutkins and then his colleague told him that the hack driver was Oliver Lutkins. The lawyer was very humiliated when he heard this.

When the lawyer reached New Mullion, did ‘Bill’ know that he was looking for Lutkins? When do you think Bill came up with his plan for fooling the lawyer?

He must have come with the plan when the lawyer asked him if he knew who Lutkins was.

2. Lutkins openly takes the lawyer all over the village. How is it that no one lets out the secret?

Ans. Lutkins tells the lawyer to be behind him every time. He therefore gives a hint to the villagers and let them negotiate with him.

3. Why do you think Lutkins’ neighbours were anxious to meet the lawyer?

Ans. Lutkins’ neighbour’s wanted to meet that lawyer because they wanted to see for themselves how such an educated person working with the justice system could be fooled so easily.