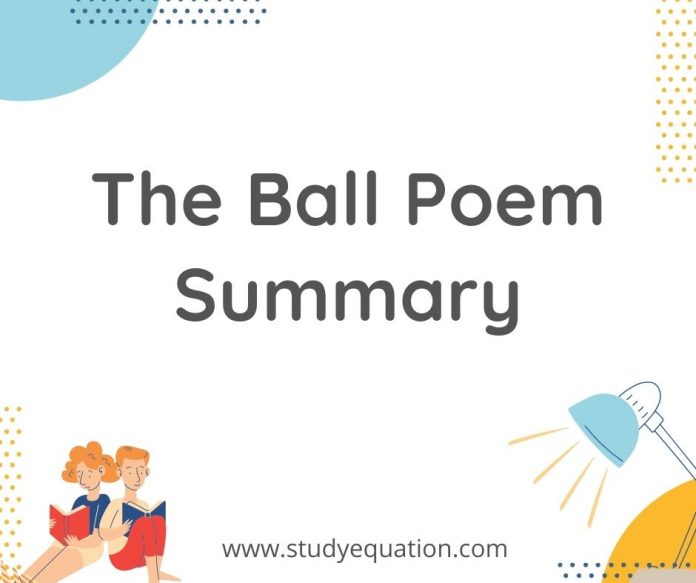 The ball poem summary – This poem is about understanding the realities of life. The poet uses the life of a little boy and his connection to a ball to represent the same. The various feelings and realizations of the boy are seen in this poem.

John Berryman was an American poet and scholar. He is best known for the Dream Songs (1969) which was a sequence of 385 poems. The poet also won Pulitzer Prize for the dream songs. He also won the National book award.

The poem starts with the poet’s question, which he asks himself. He talks about a boy who has lost his ball and asks what he will do after losing it. The boy was very happy and cheerful when the ball was with him. The poet further says that the boy must have lost his ball while playing with it by throwing it up and down. At that moment, the ball must have slipped from the boy’s hand and into the street. It then fell into the nearby river and went into the water.

The poet says that there is no use to say that the boy will get another ball. The boy is very sad and is in deep sorrow. He stands in a fixed position, shaking and looking into something continuously. The boy feels that all his young days and childhood memories are gone down in the harbour with the ball. The boy cannot be told to buy another ball as it would not be worth it. The new ball cannot bring childhood memories and a sense of belonging to the boy.

The poet further says that for the first time, the boy has felt a sense of responsibility. He should take care of his things so that they do not get lost in the future. Here, the ball symbolises the happy moments and innocent days of childhood. The ball loss is compared with man’s innocent nature. Once we lose our innocence, we can’t get it back.

The poet says that the world is full of materialistic things. People will be losing something similar to the ball all the time. They get attached to materialistic things, but these things will not stay forever. The boy has to learn to live without them. The poet further says that no one can buy things back. Money is an external thing. Everything can’t be bought with money. The boy is learning from his experience of losing the ball and trying to get out of that sorrow. He is trying to understand the real truth of life by accepting the miseries of life and standing up again. Early or later, everyone learns the harsh truth that suffering is an inevitable part of life and that we need to forget the pain and move ahead. Therefore, we should learn to accept and let go.

The ball poem summary – This poem successfully describes how we may feel to lose something that we love and grow up eventually without it.

What is the boy now, who has lost his ball,
What, what is he to do? I saw it go
Merrily bouncing, down the street, and then
Merrily over — there it is in the water!

Literary devices:
Anaphora: use of repeated words in two or more lines (What is the boy… what, what and merrily bouncing merrily over)
Assonance: repeated use of vowel ‘o’ (boy, now, who, lost)
Imagery: when poet says merrily bouncing down the street
repetition: ‘what’ is repeated

No use to say ‘O there are other balls’:
An ultimate shaking grief fixes the boy
As he stands rigid, trembling, staring down
All his young days into the harbour where
His ball went. I would not intrude on him;
A dime, another ball, is worthless now
He senses first responsibility

Literary devices:
Repetition: use of word ‘ball’
Asyndeton: no use of conjunction in a sentence (A dime, another ball, is worthless)

In a world of possessions. People will take
Balls, balls will be lost always, little boy.
And no one buys a ball back. Money is external.

Literary devices:
Alliteration: use of sound ‘b’ at the start of two consecutive words (buys a ball back)
Assonance: use of vowel sound ‘e’ (He is learning, well behind his desperate eyes)
Repetition: ‘ball’ word is repeated.

Q1 Why does the poet say, “I would not intrude on him”? Why doesn’t he offer him money to buy another ball?
Answer: The poet does not want to intrude so that the boy can get a chance to learn the real truth of life. He has to learn to accept the loss. The loss here means the most important things or relationships.

Q2 “… staring down/All his young days into the harbour where/His ball went …” Do you think the boy has had the ball for a long time? Is it linked to the memories of days when he played with it?
Answer: Yes we can say that the boy had the ball for a very long time. The line itself describes how the boy recalls those days when he used to play with the ball. The ball was surely linked to some sweet memories of him playing with the ball.

Q4 Do you think the boy has lost anything earlier? Pick out the words that suggest the answer?
Answer: The line in the poem “now he senses his first responsibility’ helps us to know that the boy has not lost anything before.

Q5 What does the poet say the boy is learning from the loss of the ball? Try to explain this in your own words?
Answer: The poet means that the boy will learn the real truth of life. He will learn how to move on in life despite of incurring heavy losses. Everyone experiences this in his/ her life when they lose either something or someone. This harsh reality that lost things never come back make people strong enough to live their life by accepting this truth of life.

Fire and Ice Summary in English by Robert Frost