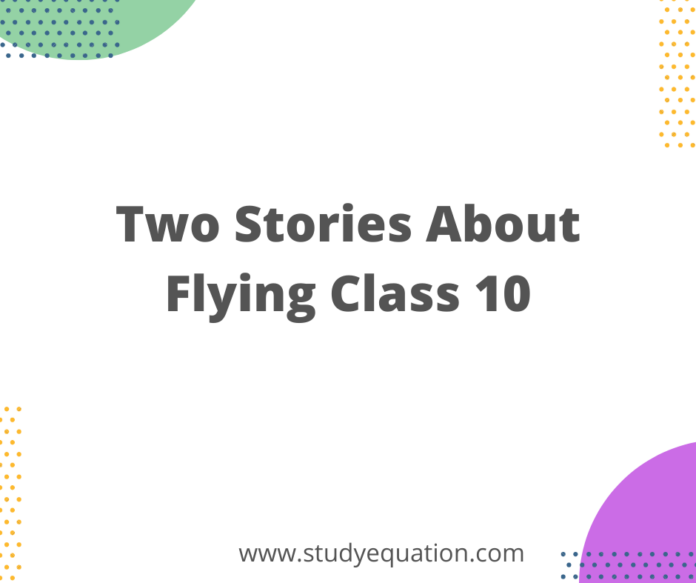 The two stories about flying class 10 from the book first flight contain two parts. The author of the first part “His First Flight” is Liam O’Flaherty, While the author of the second part “Black Aeroplane” is Frederick Forsyth. In the first part of the story, the readers came to know about a young bird Seagull Who is very afraid to fly. In the second part of the story, the narrator narrates the story of a student who is returning from back to England on a flight the story has the incidents and events that happen on the way.

Summary of the Two Stories About Flying Class 10

The Chapter “Two Stories About Flying” is divided into two parts. The first part of the story is “His First Flight” by the author Liam O’Flaherty, in this part, all the readers came to know about a young bird seagull who is very afraid to fly. The Young seagull is fed lovingly by his parents.

The time comes when he must learn to fly his siblings have learned the art of flying but he is afraid to fly so to make him fly, his family leaves him alone on the ledge they threaten him that he will starve and die but the young bird refuse to fly. When the 24 hours have passed the young seagull starts feeling hungry and he suddenly sees his mother having a fish. This sight increases his hunger. His mother got an idea she tempts the young seagull with food in her beak. In order to get the food, the Hungry seagull comes to the edge of the rock and falls down from it.

Now he gets terrified but his fear lasts only a minute. He opens his wings and starts flying he gets happy to see that he didn’t fall into the sea on seeing this his family screamed with joy. After some time, they land on the sea. Now the young seagull drops his legs and starts floating on the sea. His family members praise him and give him pieces of fish to eat. so, in this way the young seagull makes his first flight.

The Chapter ” Two Stories About Flying” is divided into two parts. The second part of the story is “Black Aeroplane” by the author Frederick Forsyth. This story is a mysterious story. It is a story about a pilot, one night he was flying his Old Dakota airplane (DS 088) over France. He was going to England. He Wished to spend his holiday with his family. At around 1:30 in the morning, he contacted the Paris control center. They told him to turn twelve degree west.

When he was 150 kms from Paris. He suddenly, saw huge black clouds in front of him. He decided to take the risk and flow his plane right into the clouds. As he entered the clouds, he found that his compass,radio and all other things stopped working. Now Suddenly, he saw a black Aeroplane near him the pilot of that strange airplane waved at him to follow him. The writer followed him like an obedient child. He was worried because the fuel in the tank was about to end in 5-10 minutes.

But soon the writer came out of the clouds and could see the lights of the runaway Airport. He landed safely. He then went to the central center and asked a women there who the other pilot was? The women looked at him strangely and told that his plane was the only one on the radar.

so, the story ends with many questions in the pilot’s mind, he remained confused about the black airplane and its pilot.

Question: Why was the young Seagull afraid to fly? Do you know think all young birds are afraid to make first flight, or are some birds more timid than others? Do you think a human baby also finds it a challenge to take its first steps?

Ans: The young seagull was afraid to fly because he was afraid of falling. All the young birds have fear while making their first flight. Yes, I think a human baby also finds it quite difficult as a challenge to take their first step.

Question: “The sight of the food maddened him.” What does this suggest? What compelled the young seagull to finally fly?

Ans: The food is most essential thing for an organism or for a living creature. It was the food that forced the young seagull to take risk and fly. Food is the basic need of all. The sight of the food maddened the young seagull and forced him to fly and he came over his fear.

Question: “They were Beckoning to him, calling shrilly”. Why did the seagull’s father and mother threaten him and cajole him to fly?

Ans: The young seagull’s father and mother wanted the seagull to become self-reliant. That’s why the seagull’s mother and father forced him to fly.

Question: “I’ll take the risk.” What is the risk? Why does the narrator take it?

Ans: The narrator witnessed the black clouds like mountain in front of him. The risk was of Flying the aeroplane through the storm clouds. The narrator took this risk as he wished to have the breakfast at home.

Question: Describe the narrator’s experience as he flew the aeroplane into the storm.

Ans.The pilot was not able to see through the clouds. The plane got twisted inside thee clouds. His compass got out of order and all other instruments also suddenly got dead. He informed the Paris control but the radio too was found dead. So, the experience of narrator was horrible.

Question: What made the women in the control centre look at the narrator strangely?

Ans: The woman was very surprised to see the narrator’s brave daring and brave act of flying the aeroplane in extremely bad weather, the night was stormy, No aeroplane could fly in such a weather and no pilot would have enough guts to do such a daring act all this made the women in the centre to look at the narrator strangely.

Question: Who do you think helped the narrator to reach safely? Discuss this among yourselves and give reason for the answer?

Ans: According to me, I think that the narrator was helped or assisted by a black aeroplane Which did not have any heavy lights. The pilot of the black airplane gave the guidance to the narrator. The narrator followed him until he was landed safely. But in reality, it was not an airplane or the pilot. It was just an fanciful imagination of the Pilot’s mind which assisted him into the time of sorrow. So, it was just an Imagination.