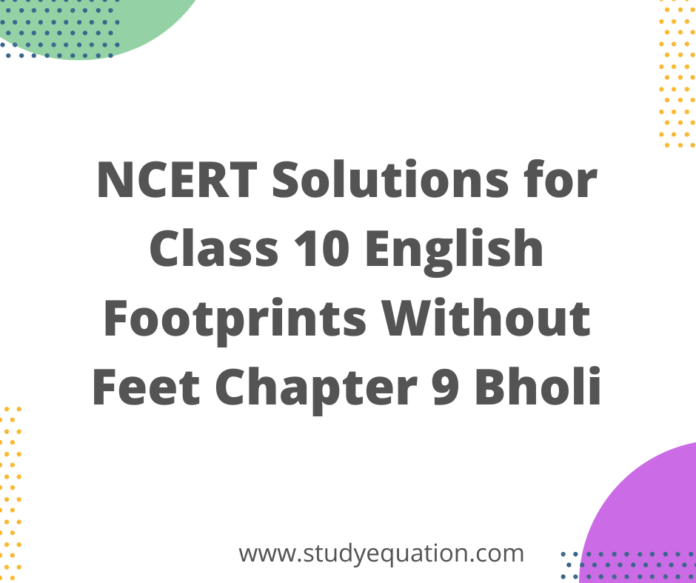 Q1. Why was Bholi’s father worried about her?

Ans. Bholi lacked both intelligence and beauty. When she was a youngster, she fell off her crib and injured a portion of her brain. Bholi caught smallpox when she was two years old, resulting in pock markings across her body. She also stammered when she talked, making her an easy target for ridicule. Bholi’s father became concerned regarding her future and marriage due to this.

Q2.For what unusual reasons was Bholi sent to school?

Ans. The village tahsildar asked Ramlal to enroll Bholi in school. However, Ramlal’s wife is opposed to Bholi attending school, and Ramlal is frightened to defy the tahsildar. Furthermore, he believed schooling would assist his fourth daughter is marrying because she was not attractive owing to pockmarks. As a result, Bholi was sent to school. As the village’s tax administrator, Bholi’s father was requested to set an example by enrolling his children in school.

Ans. Bholi had no idea what a school was like or happened there, but c. When Bholi arrived, the lady instructor spoke to the girls, but she couldn’t comprehend anything. Instead, she was drawn to the colors of the paintings on the wall. She started crying as the instructor asked her name, and she sat in her nook, not trying to look up at the girls who, she knew, were still giggling at her. However, Her teacher urged her to overcome her phobia and attend daily school. She then hands her a picture book and informs Bholi that she will soon be able to talk without stammering. She felt her heart pulse with a fresh start and a new life near the conclusion of the day.

Q4. Does she find her teacher to be different from the people at home?

Ans. Bholi had been abused as a youngster. She never showered. She was chastised and mocked by everyone. Her teacher, on the other hand, supported her and provided her with faith. She was friendly to her and told her that if she attended school daily, she would indeed be able to access books in a month. In this manner, she would be more knowledgeable than anybody else in the community, and no one would be able to mock her. She assured her that people would respect her and that Bholi would be able to talk without stammering. Therefore, she found her teacher different from everyone she knows.

Ans. Because Bishamber was a well-established guy, Bholi’s parents approved his marriage proposal. He had his residence and a large store. They feared that she would remain single for the rest of her life if they did not accept the proposal. They believed this was their only chance because Bishamber came from a different village and didn’t care about her pockmarks or lack of intelligence. Also, Bholi did not want to burden her parents, so she accepted the proposal willingly.

Q6. Why does the marriage not take place?

Q7. Bholi had many apprehensions about going to school. What made her feel she was going to a better place than her home?

Ans. Bholi was first afraid to attend school since she was unfamiliar with the location. She compared her predicament to her cow, Laxmi, which was hauled out of the home and sold a few days ago. She was clothed well for the first time, and oil was put into her dry hair. Her parents’ altered demeanor gave her the impression that she’d been sent to a better location than her home.

Q8. How did Bholi’s teacher play an important role in changing her life?

Ans. Bholi was a meek and innocent young lady. She was ten months old when she fell from her crib, which injured a section of her brain and caused her to be less sharp than other youngsters. She couldn’t talk until she was five and stuttered when she did. Bholi hesitated when her instructor asked her name for the first time, and everyone mocked her. This infuriated Bholi. She was also aware of her pockmarks.

Bholi’s teacher had a significant impact on the direction of her life. She was lovely and pleasant, and it warmed her heart. She was always encouraging and kind to Bholi. She implored Bholi to set aside her anxiety about being unable to communicate adequately. She converted Bholi into a confident young lady who could read, write, and talk properly, resulting in her having self-respect and pride.

Q9. Why did Bholi first agree to an unequal match? Why did she later reject the marriage? What does this tell us about her?

Ans. Bholi’s father accepted the marriage proposal since, in his opinion, she was fortunate to have a well-to-do husband who ran a large business, had his own house, and had a lot of cash in the bank. Furthermore, he did not request a dowry. He was utterly unaware of Bholi’s pockmarks and lack of sensibility. Because of her father’s pride, she approved the marriage proposal. Bishamber was taken aback when he noticed Sulekha’s face. He did not want to marry her at the time because of the pocs on her face, but he agreed to marry if Bholi’s father paid him 5,000 rupees. Ramlal stepped in, unlocked the safe, and counted the notes, tears running down his cheeks. He set the package down at the bridegroom’s feet. Because the groom requested a dowry, the wedding did not take place. This tells Bholi had self-pride and could not stand her father’s insult.

Q10.Bholi’s real name is Sulekha. We are told this right at the beginning. But only in the last but one paragraph of the story is Bholi called Sulekha again. Why do you think she is called Sulekha at that point in the story?

Ans. The word  Bholi is a term for a simpleton. Throughout the narrative, she was a simpleton, rarely voicing her view on anything. Sulekha denotes “a person with a great sense of letters.” This term has a broader connotation in this narrative. It represents being literate, knowledgeable, and mature. Bholi has genuinely transformed into Sulekha after her schooling, and her statement during the marriage is her declaration to society that she is no longer a Bholi but Sulekha.

Sulekha, Bholi’s actual name, is revealed at the novel’s beginning. Sulekha’s childhood is displayed at the beginning. She fell from her cradle when she was ten months old, hurting a section of her brain and injuring a portion of her brain. It hampered her development, and she was less intellectual than other youngsters. She couldn’t talk until she was five and stuttered when she did. This earned her the nickname Bholi. However, her instructor pushed her to talk and learn when she went to school. She inspired her and sparked a new light in her personality. She gave her fresh hope, something she most likely never received from her family.

Q11. At what age was Bholi sent to school?

Ans. Mangla married Bholi when she was seven years old. In the same year, a girls’ elementary school was established in the community where she went.

Q12.Provide two points to show that Bholi’s wedding was spectacular?

Ans. Bholi’s marriage was set up with Bishamber, who owned a large store, his own home, and several thousand dollars in the bank. It was a wonderful union. First, the parade was led by a brass band performing a popular number from an Indian film. Second, the groom was riding a beautifully ornamented horse. Finally, he arrived with a large group of friends and family in what appeared to be a parade.

Ans. Bholi was undeniably her teacher’s masterpiece since she overcame her disability of stammering under her instruction. The shy and reserved youngster blossomed into a brave and confident young lady. She was a genuine masterpiece because she had the fortitude to stand up to dowry, a social evil, and refuse to marry the avaricious Bishamber Nath.