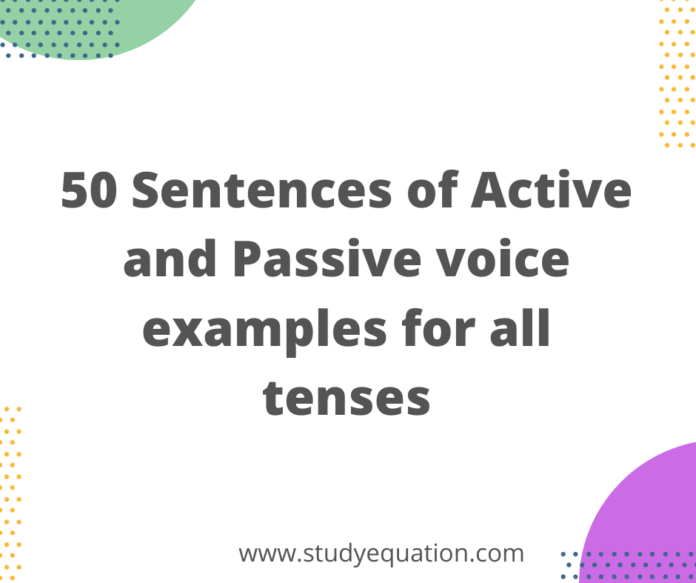 The active Voice claims that the action indicated by the verb is carried out by the person or object represented by the grammatical subject. The passive Voice makes the subject the person or thing who is acted on or influenced by the verb’s activity. We can get an idea of this by perceiving 50 sentences of active and passive voice examples for all tenses.If you want practice 100 examples of active and passive voice

The voice of a verb conveys whether the action was performed or received by the subject of the sentence. In English grammar, there are two sorts of voices:

Active Voice occurs when an activity done by the subject is communicated through the action word. When a stronger link and clarity between the topic and the action word are required, dynamic Voice is used.

Let’s Understand By an Example

Active: He does not play football.

Passive: Football is not played by him

Active and Passive voice rules for all tenses

1)Rule 1: To convert an active sentence to passive voice, identify the (S+V+O) Subject, Verb, and Object.

Passive Voice: The food is cooked by her. (Object Food is interchanged with the subject She).

petrol is sold in liters.

4) Rule 4: In an active phrase, change the base verb to the past participle, i.e. third form verb in a passive sentence, i.e. preceded by (By, With, to, etc). In passive voice statements, base verbs are never utilised.

Active voice: She prepares her homework.

Passive voice: Her homework is prepared by her.

Active voice: She knows him.

Passive voice: He is known to her.

5) Rule 5: When converting an active sentence to a passive sentence.
6) Rule 6: Use the appropriate assisting or auxiliary verb (is/am/are/was, for example). Each tense has its own set of criteria for utilising auxiliary verbs in passive voice phrases.

100 examples of Active and Passive voice

100 examples of active and passive voice

Active and Passive voice structure for all tenses

The rules for active and passive voice for several tenses are presented here, including:

However, there are no passive voice forms for these tenses:

Active: He does not play basketball.

Passive: Basketball is not played by him.

Passive: Are chips purchased by him?

Active: Is Sahil buying a laptop?

Passive: Is a laptop being bought by Sahil?

Active: They are cheering players.

Passive: Players are being cheered by them.

Active: Aneesha has challenged him.

Passive: He has been challenged by Aneesha.

Active: Have they left the room?

Passive: Has room been left by them?

Active and Passive Voice Rules for Past Simple Tense

Examples of Past Simple Tense

Passive: A watch was bought by Chaitu.

Passive: Tanaya was saved by me.

Active and Passive Voice Rules for Past Continuous Tense

Examples of Past Continuous Tense

Active: Kankshi was scratching the wall.

Passive: The wall was being scratched by Kankshi.

Active: Were you reading the poem?

Passive: Was the poem being read?

Active and Passive Voice Rules for Past Perfect Tense

Examples of Past Perfect Tense

Active: Shaily had not received the order.

Passive: The order had not been received by Shaily.

Active: Had they brought the coke?

Passive: Had the coke been brought by them?

Also Read : How To Write A Poem Easily Step By Step?

Active: Riya will blew the balloon.

Passive: The balloon will be blewed by Riya.

Active: Will you clean the table?

Passive: Will the table be cleaned by you?

Active: Madhav will not have changed the sofa cover.

Passive: The sofa cover will not have been changed by Madhav.

Active: Ashu will have washed my dress.

Passive: My dress will have been washed by Ashu.

Noun and Pronoun for Active and Passive : Active and passive voice examples for all tenses