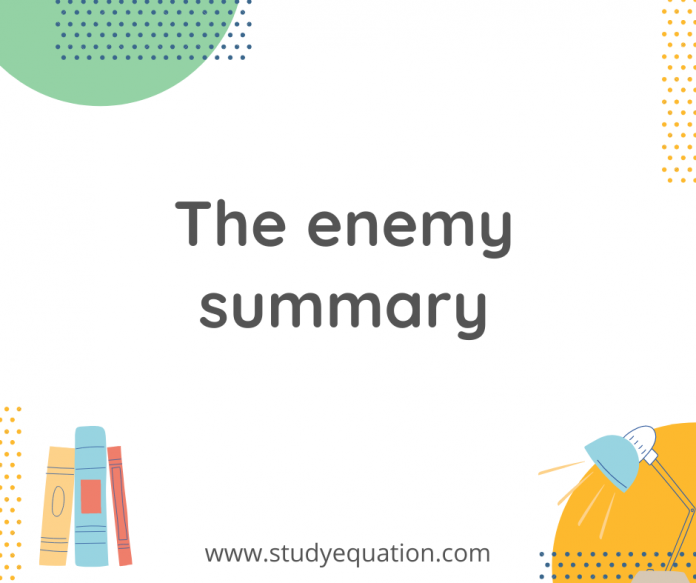 The enemy summary (Class 12) along with explanation, pdf and mcq. This chapter is about a Japanese doctor who is not sure if he should help an American soldier during World War II. He is conflicted but he helps the soldier and makes sure that he gets his strength back after which he contemplates killing him. The Enemy is a tale that Pearl Sydenstricker Buck wrote.

The Enemy Pearl S. Buck. This story is set during the World War. A Japanese doctor finds an American prisoner of War washed up on the shore in a dying condition. He is confronted with the dilemma of whether to save him or give him over to the army.

Sadao, an emotionally complex character, struggles with reconciling his inexplicable urge to save the life an American who is supposedly his enemy and his staunch Japanese patriotism

The soldier summary in hindi : The enemy summary

Discovery of the wounded soldier – The enemy summary

A surgeon from Japan named Sadao Hoki went to America to study, and there he met a Japanese girl, Hana. He marries her and takes her back to settle down in Japan. This was the Second World War era. Therefore, all Japanese doctors was called in to serve the army. They allowed Sadao to remain behind as he was tending to an old general. However, one night, his life is transformed by an incident.

Sadao and his wife were watching the mists hide outlines of a little island near the shore. They saw something black come out of the mists. It was a man. He staggered a few steps. Then the curled mists hid him again. Hana and Sadao leaned over the railing of the veranda. They saw a man crawling on his hands and knees. Then he fell down on his face and lay there. They thought that it was perhaps a fisherman who had been washed from his boat.

They first tried to find out who he was. He looked American and the battered cap had faint lettering “US Navy”. They concluded that he was a sailor from an American warship. The man was a prisoner of war. He had escaped and was wounded in the back.

Hana asked Sadao if they were able to put him back into the sea. Sadao hesitated. If the man had been whole, he could be turned over to the police without difficulty as he was his enemy. All Americans were his enemy. But since he was wounded they should not throw him back to the sea.

While Sadao had no intention of helping the enemy, he took the young soldier and provided him with medical assistance. He kept him in his house, in order to avoid any danger that may come his way. He knew, however, that he had opened the door to danger by assisting the enemy. His servants abandon him as well.

The soldier’s recovery : The enemy summary

The soldier was now able to recover his strength as the days began to pass. Now that the patient was no longer a patient, Sadao wanted to kill him in his sleep. He tells the old general about his desire and they plan to send private killers to kill the American soldier.

He was waiting for the assassins to arrive and finish the job. Fortunately, during this course, morality in Sadao emerges. At the end of the day, he knows that the soldier is a human being. He understood the spirit of brotherhood and mercy. This opened his mind, which was limited to race, territories, and wars. He decided to help the soldier escape.

The soldier’s escape : The enemy summary

He offered to put his boat on the shore that night. It would have food and extra clothing in it. Tom, the soldier might be able to row to that little island not far from the coast. It had not been fortified. Nobody lived there as it was submerged in storm. Since it was not the season of storm, he could live there till he saw a Korean fishing boat pass by. He gave him his flashlight. He asked him to give him two flashes as the sun set in case his food ran out. In case he was still there and all right, he was to signal him only one. He was warned not to signal in darkness, for it would be seen. The prisoner was now dressed in Japanese clothes. A black cloth was wrapped round his blond head.

Dr Sadao had been called in the night to perform an emergency operation on the General. It involved his gall bladder. For twelve hours Sadao had not been sure the General would live so he had not been able to ask about the assassins.

One week after the operation, Sadao felt that the General was well enough to be spoken to about the soldier. Sadao informed him that the soldier had escaped. The General asked him whether he had not promised to kill the man. He then confessed the truth as he had been feeling guilty for not being able to kill the American.

The enemy summary (Class 12) along with explanation, pdf and mcq. This chapter teaches us the value of humanity and brotherhood. We must treat other human beings with kindness and compassion. We learn that just as Sadao did not kill an enemy, we must also not resort to despising those who hate us.

Also Read: My Mother at Sixty-six

Questions and Answers – The enemy summary ( the enemy question answers )

Who was Dr Sadao? Where was his house?

Ans. Dr Sadao Hoki was an eminent Japanese surgeon and scientist. He had spent eight valuable years of his youth in America to learn all that could be learnt of surgery and medicine there. He was perfecting a discovery which would render wounds entirely clean.
Dr Sadao’s house was built on rocks well above a narrow beach that was outlined with bent pines. It was on a spot of the Japanese coast.

Will Dr Sadao be arrested on the charge of harbouring an enemy?

Will Hana help the wounded man and wash him herself?

Ans. The gardener and the cook were frightened that their master was going to heal the wound of a white man—an enemy. They felt that after being cured he (the white man) will take revenge on the Japanese. Yumi, the maid, was also frightened. She refused to wash the white man. Hana rebuked the maid who had refused to wash a wounded helpless man. Then she dipped a small dean towel into the steaming hot water and washed the white man’s face. She kept on washing him until his upper body was quite dean. But she dared not turn him over.

What will Dr Sadao and his wife do with the man?

Ans. Dr Sadao and his wife, Hana, had told the servants that they only wanted to bring the man to his senses so that they could turn him over as a prisoner. They knew that the best possible course under the circumstances was to put him back into the sea. However, Dr Sadao was against handing over a wounded man to the police. He operated upon him and extracted the bullet from his body. He kept the white man in his house. His wife and him looked after him and fed him till he was strong enough to walk on his legs.

Will Dr Sadao be arrested on the charge of harbouring an enemy?

Ans. It was the seventh day since Dr Sadao had operated upon the young white man. Early that morning, their three servants left together. In the afternoon, a messenger came there in official uniform. He told Dr Sadao that he had to come to the palace at once as the old General was in pain again.
Hana, who had thought that the officer had come to arrest Dr Sadao, asked the messenger, “Is that all?” The baffled messenger enquired if that was not enough. She tried to cover her mistake by expressing regret and admitted that the General’s illness was enough. Dr Sadao told the General about the white man he had operated upon. Since Dr Sadao was indispensable to the General, he promised that Dr Sadao would not be arrested.

What will Dr Sadao do to get rid of the man?

Ans.Dr Sadao had told the old General that he had operated upon a white man. The General promised to send his private assassins to kill the man silently and secretly at night and remove his body. Dr Sadao left the outer partition of white man’s room open. He waited anxiously for three nights. The servants had left their house. His wife Hana had to cook, clean the house and serve the wounded man. She was unaccustomed to this labour. She was anxious that they should get rid of the man.

Dr Sadao told Tom, the white man, that he was quite well then. He offered to put his boat on the shore that night. It would have food and extra clothing in it. Tom might be able to row to the little island which was not far from the coast. It had not been fortified. The .water was quite deep. Nobody lived there, as it was submerged in storm. Since it was not the season of storm, he could live there till he saw a Korean fishing boat pass by. He gave the man his flashlight. He was to signal twice with his flashlight at sunset in case his food ran out. In case, he was still there and all right, he was to signal only once.
Dr Sadao gave the man Japanese clothes and covered his blond head with a black doth. In short, Dr Sadao helped the man to escape from Japan. At the same time he also got rid of the man.

Sadao went to america to learn?

Sadao Hoki traveled to America to study medicine and surgery as his father wanted. Although his experience in America was not great, he was thankful for the good teachings of his professors.