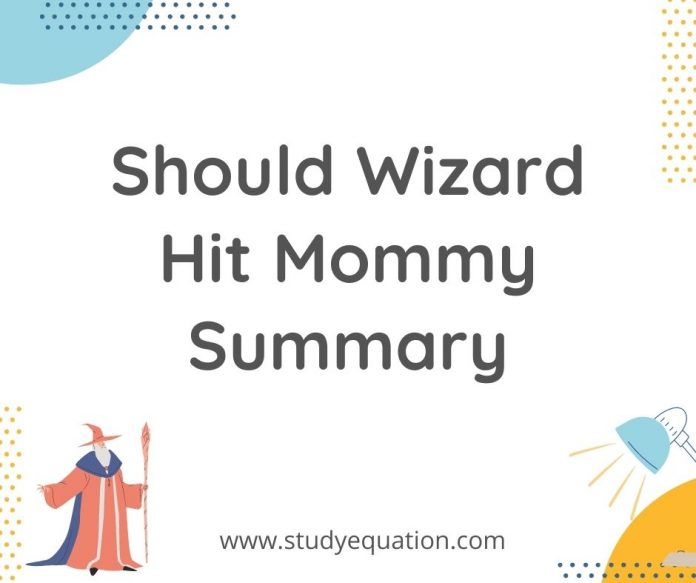 We also provide Notes and Lesson Plan. Our Study Rankers specially made them for better understanding. Students may read the PDF of NCERT Class 12 English Should Wizard Hit Mommy to practice concepts with NCERT Solutions and Extra Questions and Answers. We prepared these by keeping in mind the latest CBSE curriculum. Shine among your friends after scoring high in Quiz, MCQ, and Worksheet.

John Updike, in this story, revolves around the conflicting views of a child and a parent on the child’s future. Parents display their expectations and desire that their children should grow up as per their expectations. However, children have their own ambitions.

Jack, the father of a 4 year old girl, used to tell stories to his daughter Jo in the evening and for Saturday afternoon naps. Every story that he recited to her was a product of his own heads. This ritual of a special way of bonding between the father and the daughter started when she turned two.

Each story of Jack revolved around one basic tale and what made one story different from other stories were the slight variations. The basic tale had the following features:

Today’s story was about Roger Skunk. Roger Skunk smelled very bad. He smelled so bad that other creatures would not play with him and used to run away. Roger was all one and he cried. In the deep forests, there lived a big wise owl. Roger decided to visit him and get a solution for his pathetic smell. On visiting the owl, he advised Roger to go to the wizard. According to the route explained by the wise owl, Roger crossed dark woods to go to the little white house of the wizard. Wizard had a long white beard and a pointed blue hat.

Roger Skunk shared his problem with the wizard. The wizard upon seeing Roger warned him to not get too close to him. He assured Roger that his problem would be taken care of, but he had to give him seven pennies. Unfortunately, Roger had only four pennies but the wizard guided him to a Magic Well where he found three more pennies and offered the total of 7 pennies to the Wizard. The wizard was content and by using his magic, he made Roger smell like roses.

All the creatures who loathed Roger now played and laughed with him. Although, Roger’s mother was very furious and didn’t like her son who smelled like roses. She explained to her son that a skunk is supposed to smell like a skunk. In anger, she took Roger straight back to the wizard and hit the wizard on his head with an umbrella. Wizard made Roger Skunk smell bad again and finally, Roger’s mother was satisfied. She loved and hugged him.

Interestingly, Jo didn’t like the end of the story because she wanted Roger to smell like roses. She insisted her father make a slight change in the story that was that wizard takes his magic wand and hits the mommy which Jack refused to do because he understood the importance of self-acceptance.

READ AND FIND OUT

Q. 1. Who is Jo? How does she respond to her father’s story-telling?

A) Jo is the four-year-old daughter of Jack and Clare. For the last two years, her father, Jack, has been telling her bed-time stories. Jack’s stories are a product of his own head and are woven around the same basic tale and have the same characters and turn of events. In this similar plotline, Jo takes so many things for granted and takes an active interest in the story-telling session. The main character) is Roger like Roger Fish, Roger Squirrel, Roger Chipmunk, or Roger Skunk. The other characters are wise, old owl, and the thin small wizard.

Q. 2. What possible plotline could the story continue with?

A) Today’s story was of Roger Skunk and how the wizard made him smell like roses at his request. The other little creatures, who earlier loathed Roger Skunk, now gathered around him because he smelled so fresh. They played various games with children till dark and then went to their homes happily.

Jo assumed that the story was over. But, when Roger Skunk returned home, his mother was furious at the unusual smell he had acquired. She called it an awful smell and asked who had made him smell like that. Mommy took her umbrella and went to the wizard with Roger Skunk. She hit the wizard right over the head. The wizard changed his smell back to a skunk’s smell. She wanted that a skunk should smell the way a little skunk should have. It should behave naturally and normally. After a while, the other small creatures got used to the typical smell of the skunk and did not run away.

A) Jo had been used to to the happy ending of the stories of Roger, where the wizard would fulfill his wishes. She liked the story where the wizard had changed his awful smell to that of the roses and all animals liked it and played with Roger Skunk happily. But, she did not like the ending of the extended story where Roger Skunk’s mother hit the wizard on the head and forced him to change Skunk’s smell to the earlier one.
She insisted that her father should tell her the same story again the next day with a changed ending that was that the wizard should hit mommy on the head and do not change the smell of Roger Skunk. In the beautiful worldview of her imagination, she could not digest the harsh realities of life.

Q. 1. What is the moral issue that the story raises?

A) The story examines moral issues dependent on different levels of maturity. There is a
sharp contrast between an adult’s perspective of life and the worldview of a little
child. Children represent innocence. Hatred and injustice have no place in their
world. In the story, the baby skunk was able to make friends only after he smelled of
roses. In Jo’s perspective, the happiness of being able to make friends surpassed
any other thing. As a result, she is unable to assess the reason why the mother skunk
pressurized her child to get his original foul body odor restored.

On the contrary, Jack tried to justify the skunk’s mother and wanted Roger to listen to
his mother even if it means smelling bad again. Jack, a typical father, wanted his
daughter to believe that parents are always correct and they know what is best for their
children. Thus, the story raises the question of whether parents should always be
followed blindly

A) Jo was not convinced with the ending of the story and coaxed her father to retell the
story the next day giving the story a predetermined path that she had set. According to
her, neither Roger Skunk nor the wizard was wrong in the story. Jo refused to accept the
end where Roger Skunk’s mother hits the wizard and that too without being hit back. She
wanted the story to end with the wizard hitting back the mother skunk with his magic
wand and chopping off her arms ‘forcefully’.

Q. 3. Why does Jack insist that it was the wizard that was hit and not the mother?

A) There were three reasons for Jack’s insistence on only the wizard being hit by the mommy:

A) As the story of Roger Skunk is unfolded, the impatient and unsatisfied Jo strongly puts forth her point of view. She did not want the story to end the way her father had perceived and narrated it. According to her point of view, the wizard should have hit the skunk’s mommy hard. Jack knew that from the ethical point of view and according to the principles of respect that one is taught from early childhood, what she was asking for was wrong.

However, the force with which Jo had asked him to change the end of the story left him
in a dilemma. He was caught in a battle between the two perspectives, and could not
find a way to make Jo understand his point of view that mothers are never wrong.

Q. 5. What is your stance regarding the two endings to the Roger Skunk story?

A)  Considering the tender age of Jo, both the endings seem a little irrational. It is certain that she will be learning from whatever she hears and visualizes at this age. If the story ends according to Jack, Jo will never be able to question anything she considers wrong in life since this ending stresses that elders are always right in whatever they do. In addition, the story shows the skunk’s mommy hitting the wizard for no fault of his. The wizard had only done what he was asked to. This may scare the four-year-old Jo, as it teaches that mothers, being elders, have the right to hit anyone, even if they are not at fault.

On the contrary, if the story ends as Jo wanted it to, it will stop her from believing in and
respecting her elders. She may even start believing that there is nothing wrong with hitting
elders.

A balanced view may be given in an apt ending, where the mommy either does not hit
the wizard at all or realizes her mistake soon.

Q. 6. Why is an adult’s perspective on life different from that of a child’s?

A) A child’s speech and line of thought, actions, and reactions, are natural and not guided by any outward influence. He speaks from his heart in accordance with what is ethically right in his perspective. On the other hand, an adult has many things to consider before speaking or reacting. Thus, the influence of society governs and dominates his thoughts.

In this chapter, Jo speaks what she considers correct. But Jack, an adult caught in a
dilemma kept thinking about the consequences of accepting his daughter’s ending to the
story and what society has made him learn over time.

Q. 1. What part of the story did Jack himself enjoy the most and why?

A) Jack enjoyed the part when the wizard entered the story. Jack was proud of his ability to enact the part of the wizard by changing his voice to suit the part, and by rolling up his eyes and making him look like an old man’s eyes.

Q. 2. How is Jack’s childhood interwoven in the story of the stinky skunk?

A) When Jack told Jo about how bad the Skunk smelt that nobody wanted to play with him, he was actually remembering the humiliation of his own childhood. He said that all other creatures ran away, leaving the oor skunk to cry alone, which was perhaps what had happened to him as a child.