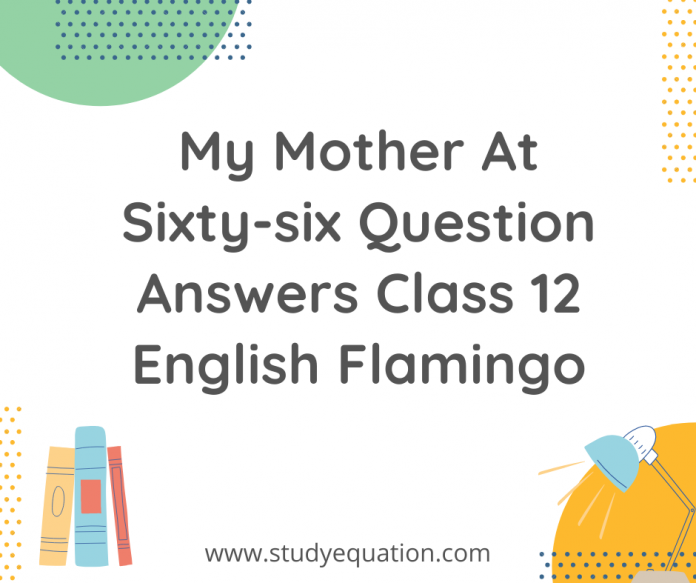 The cycle of life entails various stages, from youth to adulthood and finally growing old. This article contains My Mother At Sixty Six Summary with questions and answers and MCQ. This poem is about the poet and her aging mother whom she fears to lose. The poem ‘My Mother At Sixty-six‘ is written by the poet Kamala Das. This article also contains a plethora of questions and answers with a small gist/explanation of the chapter.

You will also find My Mother at Sixty-Six NCERT solutions to aid your doubts. Ace your exams with all your doubts cleared from this article for our My Mother At Sixty Six explanation.

Poet Kamala Das is My Mother At Sixty-six author. Kamala Das was born in Malabar, Kerala. She recalls here about the time she had a flight to catch and her mother accompanied her. She said her mother looked old and that was childhood fear, to see her mother grow old infront of her eyes, and it was being true. Scroll below for an in-depth review of My Mother At Sixty Six Summary.

My Mother At Sixty Six Summary

One day the poet was driving from her parent’s home to Cochin. It was a Friday. And then she saw and she suddenly realised that her mother had grown old. She saw her mother beside her and her mother felt like a corpse with little life inside her. Then it struck her that this was reality and her mother was really growing old. She felt helpless and so she soon put the thought of losing her away from her mind.

Then, she looked at the young trees which she left behind as the car drove in the front direction. She looked at young children playing and it reminded her of youth. Unlike her mother growing old which was her childhood fear.

At the airport security check she saw her mother again and felt like she was looking at the winter’s moon. The late winter moon is referred here because she felt winter moon is pale and calm which symbolises old age. Then she bade her goodbye and told her that she would see her soon again. She smiled because she could not let her mother know about her old age and her fears and so she just wished her to see her soon again.

My Mother At Sixty Six Summary in Hindi

1.What is the kind of pain and ache that the poet feels?

Ans. The poet simultaneously feels helplessness and sadness of losing her mother due to old age.

2. Why are the young trees described as ‘sprinting’?

Ans. She looked at the young trees which she left behind as the car drove in the front direction. As the people inside the car feel like they are stationary and the things outside the car from their windows are moving, that is why the trees are said to be sprinting.

3. Why has the poet brought in the image of the merry children ‘spilling out of their homes’?

Ans. The poet has contrasted the image of children with her own mother who was old. She wants to tell us that she looked away from her mother to these young beings so that she does not feel bad and helpless about her mother.

4. Why has the mother been compared to the ‘late winter’s moon’?

5. What do the parting words of the poet and her smile signify?

Ans. The poet said to her mother that she is going to see her soon again and so she smiled. This signifies that she loves her mother and does not want to lose her. She wants to come back for her soon. She holds hope to see her again.

Q. What is the significance of the title My Mother at Sixty Six?(Alternatively: Explain My Mother At Sixty Six central idea)

Ans. From the above mentioned My Mother At Sixty Six Summary, we acknowledge a beautiful poet about a girl, i.e. the poet, and her relationship with her mother. She fears that she might lose her mother and so she says that she will see her soon. My Mother At Sixty-six is a poem that all of us can relate to. We all fear about losing someone we love. These thoughts will always be there. Inspite of that we should learn to enjoy the moments with our precious ones.

Q. What is the theme of My Mother at Sixty Six ?

Ans. My Mother At Sixty-six theme displays tragic fear of losing someone we love. Here it is the fear of losing the poet’s mother, whom she shares a beautiful bond with.

Q. For My Mother at Sixty Six poetic devices are?

Ans. The two poetic device used in the poem ‘My Mother At Sixty-six’ are

doze, open mouthed, her face
ashen like that
of a corpse

Meaning. The poet here compares the face of her mother to a corpse. This is because she has aged so much she looks like a corpse in some way.

Meaning. The poet here says that trees are sprinting because when she looked at the young trees which she left behind as the car drove in the front direction, it looked like they were running or sprinting.

Kamala Das has beautifully portrayed the contrast between the different phases of our lives. We have thus provided in both formats,English and Hindi, My Mother At Sixty Six Summary for students alike. We suggest you to check our other articles for various NCERT solutions, across all classes.

A thing of beauty poetic devices