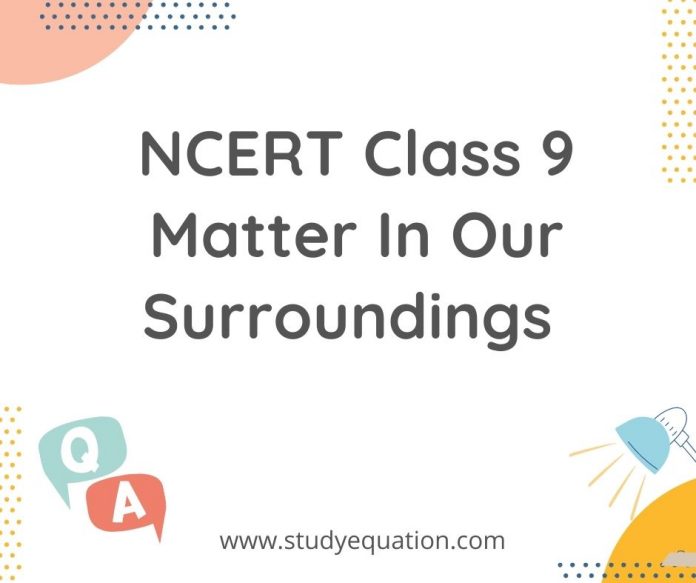 Along with NCERT Solutions For Class 9 Science Chapter 1 Matter in Our Surroundings, we also provide Notes and Lesson Plan made specially by our Study Rankers for better understanding. Students may read the NCERT Science Chapter 1 PDF to practice concepts with NCERT Solutions and Extra Questions and Answers by keeping in mind the latest CBSE curriculum. Shine among your friends after scoring high in Quiz, MCQ, and Worksheet.

Notes For Class 9 Science Matter in Our Surroundings

Evidences of Particles in Matter

The evidence for the existence of particles in matter and their motion comes from the experiments on diffusion and Brownian motion.

Characteristics of Particles of Matter

The important characteristics of particles of matter are the following:

The Particles Of Matter Are Very, Very Small:

The Particles Of Matter Have Space Between Them:

The Particles Of Matter Are Constantly Moving:

The Particles Of Matter Attract Each Other:

On the basis of physical state, all the matter can be classified into three groups: Solids, Liquids and Gases.

Properties of Solids, Liquids and Gases

Change of State of Matter

The evaporation of a liquid depends mainly on the following factors:

A) From the above list, matter are: Chair, Air, Almonds, and Cold-drink.

Q. 2. Give reasons for the following observation:
The smell of hot sizzling food reaches you several meters away, but to get the smell from cold food you have to go close.

A) The smell of hot sizzling food reaches several meters away, because the gaseous and aromatic articles of hot food have more kinetic energy and hence can travel freely and faster than the particles of cold food.

Q. 3. A diver is able to cut through water in a swimming pool. Which property of matter does this observation show?

A) The presence of intermolecular space in a liquid (here, water), is the reason why a diver is able to cut through water in a swimming pool.

Q. 4. What are the characteristics of the particles of matter?

A) The characteristics of the particles of matter are:

Q. 1. The mass per unit volume of a substance is called density (density = mass/volume). Arrange the following in order of increasing density: air, exhaust from chimneys, honey, water, chalk, cotton and iron.

Q. 2. (a) Tabulate the differences in the characteristics of states of matter. (b) Comment upon the following: rigidity, compressibility, fluidity, filling a gas container, shape, kinetic energy and density.

A) (a) Difference in the characteristics of 3 states of matter.

Q. 4. Liquids generally have lower density as compared to solids. But you must have observed that ice floats on water. Find out why.

A) The molecules in ice make a cage-like structure with plenty of vacant spaces which allows it to float on water.

Q. 3. For any substance, why does the temperature remain constant during the change of state?

A) During the change of state of any matter heat is supplied to the substance so as to overcome the force of attraction between the particles. At this point, the temperature remains constant. This extra heat is acquired by the molecules by latent heat to change from one state of matter to the other state.

A) A cylinder with a piston fitted on it will cool and apply pressure on gases leading to liquefication of gases.

Q. 1. Why does a desert cooler cool better on a hot dry day?

A) The outer walls of the cooler are sprinkled with water constantly. This water evaporates due to hot dry weather. Evaporation causes cooling of inside air of cooler. A fan sends this cool air into the room.

Q. 2. How does the water keep in an earthen pot (matka) become cool during summer?

A) The earthen pot is porous with a lot of pores on it, the water oozes out through these pores and the water evaporates at the surface of the pot thereby causing a cooling effect. This makes the pot cold and the water inside the pot cools by this process.

Q. 3. Why does our palm feel cold when we put some acetone or petrol or perfume on it?

A) Acetone, petrol or perfume evaporate when they come into contact with air. The evaporation causes cooling sensation in our hands.

Q. 4. Why are we able to sip hot tea or milk faster from a saucer rather than a cup?

A) Tea in a saucer has a larger surface area than in a cup. The rate of evaporation is faster with the increased surface area. The cooling of tea in the saucer takes place sooner than in a cup. Hence we are able to sip hot tea or milk faster from a saucer rather than a cup.

Q. 5. What type of clothes should we wear in summer?

A) We should wear light-colored cotton clothes in summer. Light color because it reflects heat. Cotton clothes because it has pores in them, which absorb sweat and allows the sweat to evaporate faster thereby giving a cooling effect.

Q. 3. Give a reason for the following observations.

Q. 4. Arrange the following substances in increasing order of forces of attraction between the particles—water, sugar, oxygen.

Q. 6. Give two reasons to justify

Q. 7. Why is ice at 273 K more effective in cooling than water at the same temperature?

A) Steam at 100°C will produce more severe burns as extra latent heat is present in it.

(Here you can find NCERT Solutions Class 9 Science Matter in Our Surroundings FAQs.)

Q. 1. When 50 g of sugar is dissolved in 100 mL of water, there is no increase in volume. What characteristic of matter is illustrated by this observation?

A) Particles of water have intermolecular spaces between them into which sugar particles fit easily.

Q. 2. Name the phenomenon that occurs when Dettol is added to water.

Q. 3. Why do we see water droplets on the outer surface of a glass containing ice cold water?

A) The water vapor present in the air comes in contact with the cold surface of the glass and condenses into droplets of water.

What are Meristematic tissue?