Ncert solutions for class 7 science Wastewater Story. This chapter is based on water pollution and the pollutants involved. It also lays emphasis on the harmfulness of contaminated water. The working of the Waste Water treatment Plant is also elaborated upon in this summary. Wastewater story class 7 extra questions with answers, wastewater story class 7 notes have been provided.

When water in the oceans, waters, rivers , streams, wetlands and beneath the earth get polluted, it is called water pollution. Water contamination leads to a difference in its physical , biological and chemical characteristics, rendering it unhealthy for consumption or other uses. These pollutants are the contaminants that cause water pollution. Water pollution may have significant effects, such as diseases, on the ecology of an area, aquatic life, etc.

The physical and biological process of treatment of water:

1. Separation of Large Objects from Sewage Water: The wastewater is first passed through bar screens which remove big objects from the water like plastic bottles, napkins, rags, cans and sticks.

2. Separation of Sand and Dirt: The wastewater is then sent to a grit and sand removal tank. This allows the sand, dirt and pebbles to settle down.

3. Removal of Solids: The water cycles in a tank called Clarifier which is sloped in the centre. This lets the solids like faeces to settle at the bottom known as sludge which is separated from the water with the help of a Scrapper. Substances like oil and grease are removed with the help of a Skimmer as they float above the water. In this step clarified water is obtained. The sludge so obtained is passed into a tank where anaerobic bacteria can decompose it and produce biogas. The biogas is then used as a fuel.

4. Suspended Sludge Removal: The clarified water also needs to be cleaned further. Hence, it is moved to an aerator that pumps air into it. This allows aerobic bacteria to grow in this water. The aerobic bacteria consume organic waste, soaps, food waste and other elements that remain in the clarified water. This water is allowed to settle for several hours and then these waste materials settle down in the tank. This is called Activated Sludge. The water is removed from the top of this sludge with the help of machines or sand drying beds. The sludge is then dried and can be used as manure.

This treated water contains fewer amounts of impurities and suspended matter. This water is safe to dump into a water body or under the ground. Hence, it is then discharged into a sea, river or underground. Nature further cleans it up.

Sometimes harmful chemicals can be present in the water even after treating them physically and biologically. These chemicals are therefore removed by using disinfectants such as chlorine and Ozone. Often chlorine gas or ozone gas is introduced in this water which purifies it chemically. 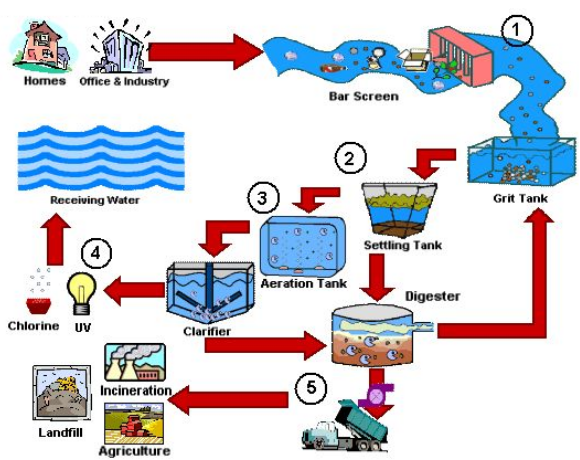 As an alternative for sewage disposal on-site sewage is being used nowadays, for example, septic tanks, compost pit toilets and chemical toilets. The onsite sewage treatments use natural procedures to treat and dispose of the wastewater or sewage. This system is suitable in places where there is no central wastewater collection system.

(a) Cleaning of water is a process of removing pollutants.

(b) Wastewater released by houses is called sewage.

(d) Drains get blocked by cooking oil and fats.

2. What is sewage? Explain why it is harmful to discharge untreated sewage into rivers or seas.

Wastewater released by houses is called sewage. Untreated sewage should not be discharged untreated into the sea because sewage consists of pollutants and harmful microorganisms which will contaminate water causing disease in people using contaminated water.

3. Why should oils and fats be not released in the drain? Explain.

Oils and fats should not be released in the drain because drains get blocked by cooking oil and fats.

4. Describe the steps involved in getting clarified water from wastewater.

Use an aerator from an aquarium to bubble air through the sample in the glass jar. Allow several hours for aeration; leave the aerator attached overnight. If you do not have an aerator, use a mechanical stirrer or a mixer. This reduces the foul smell of wastewater.

Water is disinfected by using a chlorine tablet.

5. What is sludge? Explain how it is treated.

Solids like faeces settle at the bottom while treating sewage, and this material is called as sludge. Sludge can be treated as follows

Sludge is removed using a skimmer and then transferred to a tank where it is decomposed by anaerobic bacteria to produce biogas.

Untreated human excreta is a health hazard because it consists of various disease-causing microorganisms and pollutants that will contaminate the soil and water resource from where people draw water for drinking and domestic purposes. When people use water contaminated with human excreta, they get diseases like Cholera, Typhoid, Dysentry and Hepatitis.

Chlorine and Ozone are used to disinfect water.

8. Explain the function of bar screens in a wastewater treatment plant.

9. Explain the relationship between sanitation and disease.

10. Outline your role as an active citizen in relation to sanitation.

Every citizen has a role to play in maintaining proper sanitisation. Following are the things we should follow to play an active role.

6. A word related to hygiene

7. A chemical to disinfect water

12. Study the following statements about ozone:

(a) It is essential for breathing of living organisms.

(b) It is used to disinfect water.

(d) Its proportion in air is about 3%. Which of these statements are correct?