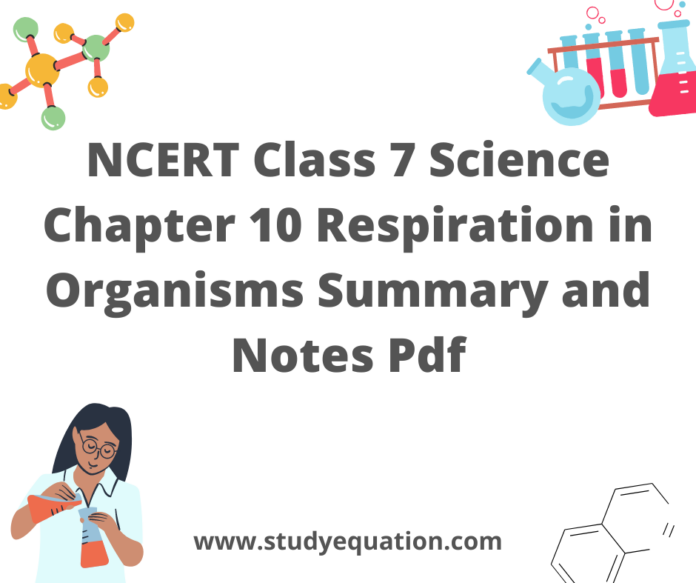 The notes for “NCERT Class 7 Science Chapter 10 Respiration in Organisms’‘ are meant to assist students in reviewing the chapter and effectively preparing for their examinations. Following a thorough analysis of the chapter, these notes are carefully written. They were designed in line with the revised curriculum and comprise all the essential subjects that might be the subject of test questions.

To fully understand the specific information at later levels, pupils must understand science fundamentals by the end of seventh grade. The NCERT Solutions Class 7 Science Respiration in Organisms notes will assist the students in quickly reviewing the whole chapter without skipping any vital information. In addition, the students will benefit from the extensive explanations as they create responses to questions focused on the subject.

Energy is required for each cell in an organism to perform tasks including ingestion, transport, excretion, and reproduction. The energy that is included in our diet is released during breathing. We take in oxygen-rich air and exhale carbon dioxide-rich air when we breathe. This is the process of breathing. Each cell in the body eventually receives the oxygen-rich air carried to every region of the body. The cell uses this oxygen for breathing. Cellular respiration is the term used to describe the process by which food is broken down in an organism’s cells, and energy is released.

All cells in an organism go through cellular respiration, which is the process by which food is broken down in the cells and energy is released. The breakdown of glucose is stated to occur during aerobic respiration when oxygen is used. Anaerobic respiration is the breakdown of food when oxygen is not used. Anaerobes, such as yeast, are defined as organisms that can thrive in the absence of oxygenWith the help of the respiratory system, breathing is the process through which oxygen-rich air enters the body and carbon dioxide-rich air exits the body. This process is known as inspiration and expiration.

The breathing rate refers to the number of times an individual breath in a minute. Our lungs expand as we inhale, and when we exhale, the air leaves and our lungs contract back to their initial size. Increased physical activity speeds up breathing. Dogs, cats, cows, and buffalo have breathing mechanisms and respiratory organs comparable to those found in humans. Roots inside plants absorb soil-based air. To allow for the exchange of gasses, leaves have microscopic holes known as stomata. Gills, the tiny holes on the sides of various insects and cockroaches, assist fish breathing in water. The skin is how earthworms breathe.

(1)Cells are tiny microscopic building blocks that make up all living things.

(2)In these creatures, these cells have several different tasks to perform, including transport, respiration, digesting, and excretion.

(3) The cells can carry out this task only with sufficient energy.

(4)Thus, food that provides them with the necessary energy is necessary for all living things.

(5)When a creature breathes or respires, the food’s energy is released.

Q. How can eating assist us in acquiring energy?

Ans. Inhaling oxygen-rich air and exhaling carbon dioxide-rich air are both parts of the breathing process. When oxygen is delivered to our cells, it aids in the breakdown of the food so that we may obtain energy.

2. The mitochondria are cellular organelles that carry out cellular respiration.

3. When a creature breathes in oxygen, the glucose-containing carbohydrates in the food react, releasing carbon dioxide, water, and energy.

1. Anaerobes are organisms that can survive in the absence of oxygen.

2. They engage in anaerobic respiration, which allows them to function without oxygen.

3. Examples include yeasts. These are unicellular species that can survive without oxygen.

4. They produce carbon dioxide and ethanol as byproducts. They are used to producing wine and beer for this reason. This is known as the fermentation of alcohol.

2. This often occurs when we engage in vigorous exercise for an extended period, for example, running, weightlifting, cycling, or walking.

3. The muscles need more energy in these circumstances, and the oxygen supply is insufficient.

4. As a result, anaerobic respiration occurs in the muscles.

5. Because of this, muscles also make lactic acid in addition to energy.

6. As this lactic acid builds up in the muscles, cramps occur.

7. Due to this, we frequently experience cramps while performing intense workouts.

8. Taking a hot bath or massaging our muscles might help us feel better from cramps.

9. This is true since taking a hot bath or getting a massage helps the muscles’ blood flow.

10. As a result, oxygen quickly reaches the cells, where it causes the lactic acid to break down into carbon dioxide and water.

1. Breathing is the process by which organisms, with the aid of their respiratory organs, take in the oxygen-rich outer air and expel the air that is heavily carbon dioxide-rich inside. In the organisms, breathing is continuous.

2. Taking in oxygen-rich air into the body is known as inhalation.

3. The act of exhaling involves removing carbon dioxide-containing air from the body. The breathing mechanism alternately alternates between inhalation and exhaling.

4. The number of breaths someone takes in a minute is called their breathing rate.

5. An intake and an exhale are both considered to be breaths.

6. In humans, the rate of breathing is not always uniform. For example, whenever our bodies require more energy, such as during exercise, we tend to breathe more quickly.

7. This is the case because the body requires more oxygen to digest food and create more energy.

8. An adult person reproduces 15–18 times each minute on average. However, this rate might fluctuate roughly 25 times per minute when exercising.

Q. Why do we get hungry just after exercising physically, like walking and running?

Ans. The foodstuff in our bodies gets transformed into energy when we exercise. Since all the food is used to produce energy, we feel hungry. We must thus eat more food to obtain more energy.

The mechanism of breathing in human beings

1. Our nostrils, which pass through the nasal cavity, breathe in the air in the surroundings.

2. Once within the windpipe, it travels to the lungs.

3. The ribs enclose the chest cavity where the lungs are placed.

4. The diaphragm is a muscular layer on the chest cavity’s bottom.

5. The diaphragm and ribcage both move during breathing. This is because breathing causes the lungs to expand and constrict.

6. The lungs are filled with air when we inhale it. This causes the ribs to expand outward and the diaphragm to sink.

7. The diaphragm and ribs return to their natural locations as the lungs expel air from the body.

Breathing in other organisms

Like humans, many animals, including lions, elephants, goats, cows, snakes, and birds, have cavities in their bodies.

1. Numerous insects, including cockroaches, have tiny apertures on their bodies known as spiracles.

2. The trachea, which resembles an air tube, is another feature that permits these insects to exchange gasses.

3. Through the spiracles, air enters the body and diffuses through the trachea into the cells.

4. Like air leaves cells, it leaves the body via spiracles and enters the trachea.

1. The skin of earthworms is smooth, silky, and moist.

2. As a result, the earthworm’s skin makes it simple for gasses to enter and exit.

3. Frogs also have slick, wet skin that aids breathing, similar to humans. Frogs do, however, also have lungs.

1. Gills are unique breathing apparatuses only seen in aquatic animals.

2. They appear on the skin of these animals as a comb-like structure.

3. Animals and the sea may readily exchange gasses thanks to gills.

4. Some amphibians have lungs that can function both on land and underwater through wet skin. Frogs and toads are two examples.

1. We are aware that plants breathe as well. They absorb the atmospheric carbon dioxide and utilize it in photosynthesis to create food. Plants produce oxygen in the environment as a result of photosynthesis.

2. All plant components can autonomously respire, which means they can independently take in carbon dioxide and release oxygen.

3. Stomata, or tiny pore-like structures, are seen on the leaves of plants. They enable the exchange of gasses in leaves.

4. The plants’ woody stems also breathe. This is due to the existence of unique tissue known as lenticels. This tissue’s cells have a lot of space between them. On the roots of woody plants, they are present as dead cells that facilitate gas exchange. Even though the bark of trees is gas-tight, these tissues are crucial for respiration in the stems. Lenticels resemble lenses, as their name indicates.

5. The plant roots are covered with hair-like structures. Consequently, they can absorb soil air.

Question 1. A specific gas has a large proportion when we expel or breathe. Specify the gas.

Answer: When we expel or breathe out, the amount or proportion of the gas carbon dioxide increases.

Question 2. We inhale into a glass of lime water in the experiment. What alterations did you notice?

Answer: Due to the CO2 in exhaled breath, lime water takes on a little milky white color when we exhale into it.

Answer: In addition to using their two lungs, frogs also breathe through their wet skin

Question 4. On the plant’s surface, a few tiny holes allow for gaseous exchange. Name these pores.

Answer: The tiny holes known as stomata are found on the surface of plants and are used for gas exchange.