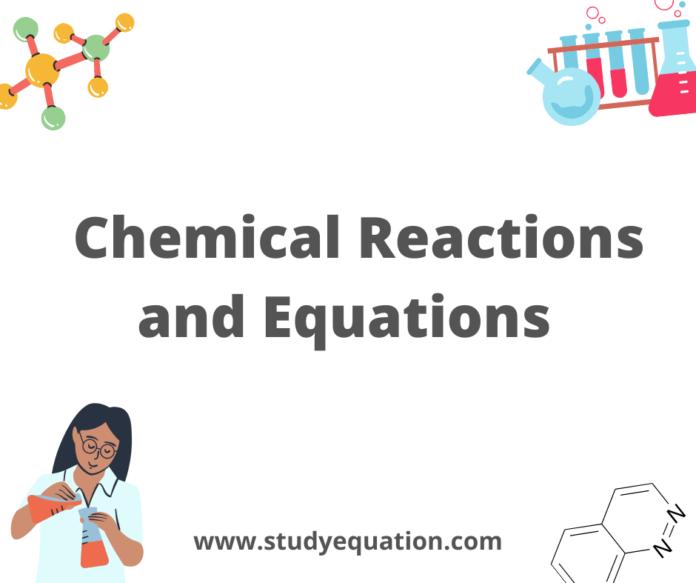 Students can also find an explanation of NCERT solutions for class 10 science chapter 1along with exercise question answers.

The NCERT Solutions Class 10 Science Chapter 1 provides an overview of the chapter’s core themes and assists you in becoming familiar with important subjects such as writing and balancing chemical equations.

1. Which of the statements about the reaction below are incorrect?

a) Lead is getting reduced.

b) Carbon dioxide is getting oxidized.

c) Carbon is getting oxidized.

d) Lead oxide is getting reduced.

Explanation: a) because oxygen is being removed, not lead is getting reduced, and b) because the removed oxygen from Lead is added to the elemental carbon.

The above reaction is an example of a

Ans: The answer to the above question is option IV) Displacement reaction.

3. What happens when dilute hydrochloric acid is added to iron filings?

I) Hydrogen gas and iron chloride are produced.

IV)Iron salt and water are produced.

Ans: The answer to the above question is I) Hydrogen gas and iron chloride are produced.

Explanation: The iron fillings displace the chlorine from hydrogen chloride, resulting in the process below.

Ans: A chemical reaction where the number of different atoms of all the elements on both the reactant and the product sides is equal is called a balanced chemical equation.

5. Translate the following statements into chemical equations and balance them.

I) Hydrogen gas combines with nitrogen to form ammonia.

II) Hydrogen sulphide gas burns in the air to give water and Sulphur dioxide.

IV) Potassium metal reacts with water to give potassium hydroxide and hydrogen gas.

7. Write the balanced chemical equation for the following reactions.

8. Write a balanced chemical equation for the following and identify the type of reaction of each case.

This is a Double Displacement Reaction

This is a Decomposition Reaction

This is a Combination Reaction

This is a Displacement Reaction

9. What is meant by exothermic and endothermic reactions? Give examples.

The reaction in which energy is released from the system to the environment, along with the formation of other products, is called an exothermic reaction. For example, explosions, concrete settings, nuclear fission, and fusion.

10. Why is respiration considered to be an exothermic reaction?

Ans: Energy is required for life to survive. This energy comes from the food we eat. The food molecules are broken down into simpler molecules, like glucose, during the digestive process. These molecules react with the oxygen in our cells to produce carbon dioxide and water, as well as a negligible amount of energy (Respiration process). Respiration is an exothermic reaction since the energy is in the form of heat (which keeps our body temperature constant). The reaction that takes place is: C6H12O6 + 6O2 → 6CO2 + 6H2O + Energy.

12. Write one equation each for decomposition reactions in which energy is supplied in the form of heat, light, or electricity.

13. What is the difference between displacement and double displacement reactions? Write relevant equations for the above.

14. In the refining of silver, the recovery of silver from silver nitrate solution involves displacement reaction by copper metal. Write down the reaction involved.

Ans: The equation involved in the recovery of silver from silver nitrate solution in silver refining is as follows:

15. What do you mean by a precipitation reaction? Explain by giving examples.

When two solutions containing soluble salts are mixed, the ions are exchanged between the compounds in a twofold displacement reaction. When one of these compounds solidifies (i.e. becomes insoluble in water), it descends to the bottom of the container. The precipitate is solid, while the precipitation reaction is the reaction in which it occurs.

Some examples of precipitation reactions are:

16. Explain the following in terms of gain of oxygen with two examples each.

17. A shiny brown colored element ‘X’ on heating in the air becomes black in color. Name the element ‘X’ and the black-colored compound formed.

Ans: Copper is a metal with a shiny brown color (Cu). When copper is heated in the air, it combines with oxygen in the air to generate copper oxide. As a result, copper oxide is a black-colored compound.

18. Why do we apply paint on iron articles?

Ans: Iron is a reactive metal. To prevent iron articles from rusting, they are painted. When the metal surface is left unpainted, it is exposed to atmospheric oxygen and, in the presence of moisture, it turns into Iron (III) oxide. However, if the surface is painted, it does not come into touch with moisture or air, avoiding rusting.

19. Oil and fat-containing food items are flushed with nitrogen. Why?

Ans: Oils and fat-containing food products are perishable and can degrade if exposed to oxygen. This is because oil and fats are reactive and easily oxidized when exposed to oxygen. The primary goal of flushing nitrogen into food packages containing oil and fat items is to prevent rancidity, which occurs when the oil or fat combines with air, producing an undesirable odor and flavor. As a result, flushing nitrogen creates an unreactive environment, which prevents rancidity.

Ans: (a) Corrosion is a process that occurs when a refined metal is oxidized by atmospheric oxygen, resulting in the formation of oxides, which are more stable compounds. During the corrosion process, the metal steadily deteriorates. When iron rusts, it is transformed into iron oxide, which is a form of corrosion. Every year, millions of dollars are spent to keep bridges and other landmarks from rusting.

(b) The process in which food items containing fats and oils are oxidized is called rancidity. The unpleasant taste and odor created by the aerial oxidation of the oil and fat present in the food substance are because of rancidity. When food is kept in the refrigerator, rancidity is delayed because the low temperature inhibits the oxidation reaction.

We can avoid rancidity by putting the food items in air-tight containers, adding antioxidants like BHA, and adding nitrogen to food packets in order to prevent oxidation.